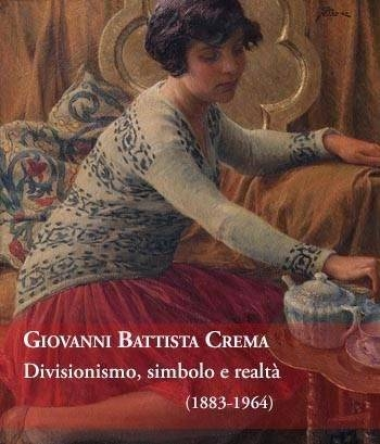 An original interpreter of Italian divisionism, Giovanni Battista Crema was one of the most prolific painters of the Roman scene of the early decades of the twentieth century. Born in Ferrara from a wealthy family, in the “Palazzo Crema” in via Cairoli with its suggestive fifteenth-century loggia, Crema showed at an early age surprising skills as a draftsman, such as to push his father – the lawyer Carlo Crema, who wanted a career for his son juridical – to send him to the workshop of Angelo Longanesi-Cattani from Ferrara in 1897. Having learned the rudiments of painting, the young man decided to move to Naples to follow the teachings of Domenico Morelli, then at the height of his fame.

From the Neapolitan master he absorbed not only the skill in the use of color, but also the ability to give works of art a strong narrative value through the creation of images with a strong expressive impact. After Morelli died in 1901, Crema then moved to Bologna to complete his studies with Domenico Ferri: in 1903, finally, he arrived in the capital, where he remained for life.

In Rome he was seduced by the pointillist technique, which he discovered by attending the cenacle of artists gravitating around the influential figure of Giacomo Balla. At first, he shared with them his fascination for proletarian subjects and social denunciation: his first important success was in 1905 at the annual exhibition of the Society of Amateurs and Cultors of Fine Arts in Rome, where with the triptych L’istoria of the painful blind attracted the attention of critics.

Two years later he held a solo show in the halls of the same company, with landscapes, sensual nudes and symbolic scenes; he will return there with a new exhibition in 1914, when he organizes the “Sala dei Giovani Romi” in full controversy with the “Secession” and, at the same time, with the favoritism of the juries of the Italian exhibitions.

His fine polemical spirit, unlined in the press of the time through biting articles in which he attacked corrupt artists and politicians, led him after the First World War – in which he had taken an active part in the trenches – to a growing detachment from fashionable circles. While leading a more secluded life, Crema continued to exhibit and produce some of his masterpieces, including some symbolist triptychs in which the divided touch gives way to a more classic investigative brushstroke.

Until the end of his life he painted without pause of continuity: portraits, evocative landscapes, symbolic scenes and snapshots of war (memorable are the paintings commissioned in 1940 by the Ministry of the Navy to document life on board), characterized by an inexhaustible creativity and that technical knowledge that led a young Filippo De Pisis to exclaim “in terms of painting technique, I understood, Crema knows a lot!” (F. De Pisis, In Art and Life: the painter Giambattista Crema, in “Gazzetta Ferrarese”, April 14, 1922).

The exhibition at the Berardi Gallery presents a hundred works, including paintings and drawings, created throughout the career of the Ferrara painter. Among these, a first version datable to around 1915 of the monumental canvas Dancers preserved in the civic museums of Ferrara, here in the dimensions of the easel painting and in the format of the triptych; and again, the masterpiece L’eterno vicenda (1926), a triptych of maturity, representing an allegory of life from the Central European secessionist memory.

Part of the exhibition will be previewed in Modena at the stand of the Berardi Gallery at the Modenantiquaria fair, from 8 to 16 February 2020. On the occasion of the exhibition, the Berardi Gallery publishes a richly illustrated monograph on Giovanni Battista Crema edited by Manuel Carrera, with an essay that traces the entire career of the Ferrara painter, reconstructed through unpublished autobiographical documents and writings.