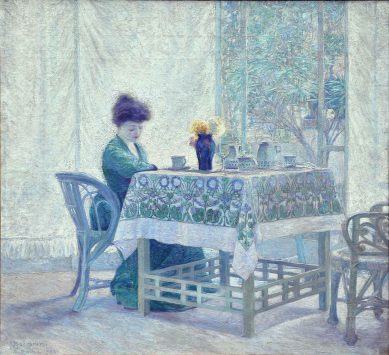 Among the most interesting personalities of Roman divisionism still awaiting a rediscovery by literature is the painter Pietro Mengarini, active in the capital since the last decade of the nineteenth century. A biographical profile of him, which can be reconstructed through the study of contemporary sources, which place him in a leading role within the debate on the new way of understanding painting. From an aristocratic family, Mengarini trained with the painter and decorator Giulio Rolland and made his debut in the Roman exhibition panorama in 1891 at the annual exhibition of the “Society of Amateurs and Cultors of Fine Arts”, where he exhibited a nude studio. It is not known exactly when and how the artist became aware of the pointillist technique, which he adopted in most of the paintings that have come down to us: it is however conceivable that he already approached it at the turn of the century, in all probability thanks to the frequentation of Giacomo Balla, one of the first Divisionists active in Rome together with Enrico Lionne. “Mengarini is obsessed with full light that almost destroys aspects and contours” 1 wrote Vincenzo Bucci in an article on pointillist painting at the exhibition of Amatori e Cultori in 1904, where the Roman artist presented eight paintings, including portraits and some views of a trip made to Tunis. In a review of the exhibition in the prestigious English magazine “The Studio”, Mengarini was associated with Discovolo, Lionne and Basilici, defined as «the apostles of the divisionist gospel» 2. The following year, when he participated for the first time in the Venice Biennale with a Nude and a Half Figure, Rusconi defined him as a “neophyte of Divisionism, which is about to become an apostle” 3, taking up the words of the British chronicler; and his special role as evangelizer was confirmed a few months later by Giuseppe Pellizza da Volpedo as well, in a letter addressed to Angelo Morbelli4.

Mengarini showed that he was deeply involved in the artistic debate of his time also at the exhibition of Amatori e Cultori in 1905, where he exhibited a large painting depicting “Jesus Christ visiting iron workers in a workshop” 5: an unusual subject, but fully in line with the “humanitarian socialism” represented in the exhibition by Giacomo Balla, involved in the organization, and Giovanni Prini, with a rich personal of sculptures; but also Giovanni Battista Crema with his Painful Story of the Blind and even the more worldly Camillo Innocenti, who in the opera Mezzogiorno represented workers taking a break from anvil and hammer to bite into a loaf of bread.

Further confirmation of the centrality of his figure in the developments of Roman divisionism is given by the National Exhibition of Fine Arts in Milan in 1906, where he was entrusted with the important task of organizing the room of the “Gruppo della Giovine Roma”. He exhibited three paintings from Divisionism – to use the words of Ugo Ojetti – «pale and foggy» 6 as La solitaria, alongside, among others, Divisionist works by Balla, Discovolo and Lionne. From that moment on, his presence at Italian and international exhibitions was regularly noticed by critics, and sometimes even his absence, as in the case of the Venice Biennale of 19127. Year after year, Mengarini presented his personal vision of Divisionism – faithful to Pellizziano example, but enriched in the material and in the modernity of the chromatic effects – through the most diverse subjects: bourgeois portraits and scenes of domestic intimism that united him with Innocenti, Noci and Lionne, but also still lifes, sacred subjects and landscapes. The marine and river views, through which the artist could linger on the effects of transparency and glow, ensured him particular success. Still Rusconi, speaking of the works exhibited at the exhibition of the Amatori e Cultori in 1907 and in particular at the Naples marina (Immacolatella), defined him as “the tireless apostle of luminism, one of the few who remained faithful to the program of the new theory, to the very young technique , which truly gave him magnificent lighting effects »8. The Neapolitan view was re-proposed by Mengarini in Paris at the Salon d’Automne in 1909. Other critics, such as Guido Marangoni9, also noted his particular ability in the landscape, and it is perhaps precisely because of such expressions of appreciation that at the great exhibition of 1911 in Valle Giulia he decided to present only two great marinas: After fishing and Anzio, the latter buys from the King for its own collections.

In the years of the Roman “Secession” he sided in the ranks of dissidents already at the time of the first discontent that arose with the Society of Amateurs and Cultors of Fine Arts, as evidenced by Giulio Aristide Sartorio in a letter to the director of “The small newspaper of Italy “Published in the issue of March 2-3, 1913.

The works of this period met with some success and were noted by critics for the luminism infused into the landscapes, such as Charcoal loaders presented at the first exhibition of the “Secession”, or Altra sponda10, a “clear, glossy and transparent” view, as Marangoni defined it11 , presented at the next edition. At the “Secession” and at subsequent exhibitions Mengarini exhibited in tandem with the painter Ida Magliocchetti, his life partner. In 1917 he returned to exhibit at the Amatori e Cultori, with a rare floral still life12.

In general, Mengarini’s entire work has a rarity character: despite his constant presence at major Italian and international exhibitions between the late nineteenth and early twentieth centuries, in fact, his works rarely appear on the market. According to sources, this would be associated with his perennial dissatisfaction and with that obsessive intellectual rigor that led him to destroy most of his paintings even many years after their realization13.

Aristocratic and refined painting, carried out over a very narrow range of tones and contrasts, an effort of pictorial virtue that borders without touching them, of course, the virtuosity and the essay of skill. A vulgar and excessive brushstroke would be enough to spoil the whole effect of the painting. But Mengarini, with an exquisite mastery of measure, maintains his character and also avoids that excess of whiteness that is wrongly reproached by someone “. 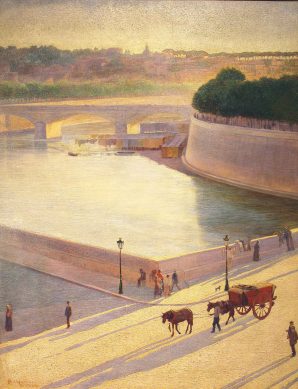 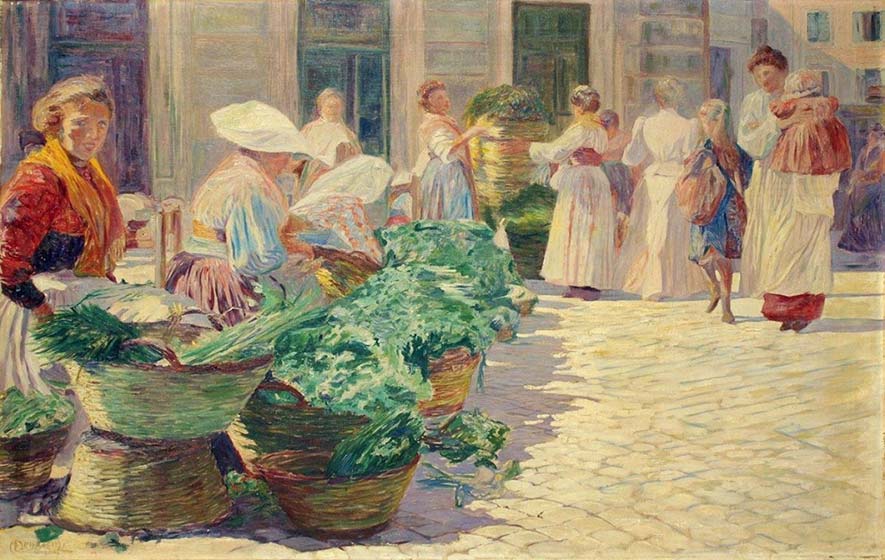 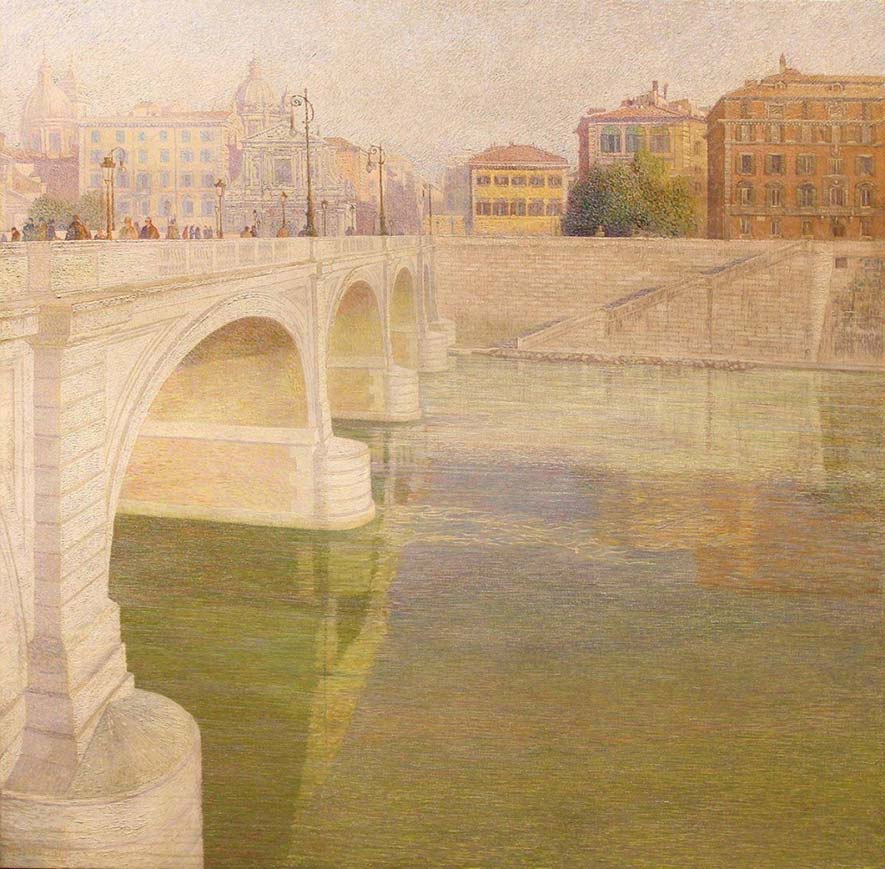 The other shore – Ponte Cavour in Rome