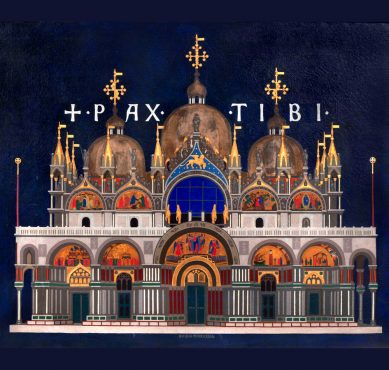 
painter between “Secession” and “Ritorno all’ordine”

The sources of the time referred recurrently to Guido Marussig (Trieste 1885 – Gorizia 1972) as an eclectic and versatile artist. His multifaceted talent had already been underlined by the critic Alfredo Melani who in 1919 described him in these terms: «designer of“ small prints ”, he is a woodcutter and a painter, decorator and poster designer; versatile, he even tries architecture “1. According to an article published in “Emporium” in 1924, what unified the different artistic expressions experimented by the artist was the impulse to “decorative synthesis” 2.

From postage stamps to monumental painting, from interior design to graphics, from scenography to architectural design, there was no area of ​​creativity that he excluded from his interests. And perhaps this versatility – moreover cultivated by similar artists, such as Guido Cadorin, equally trained in the Veneto area in the sign of the idealized secessionist myth of the synthesis of the arts – has delayed the understanding of the real value of Marussig. Only starting from the 1980s – with the slow emergence of a historiographical canon no longer exclusively aimed at celebrating in hagiographic terms the deeds of a small number of characters ascribable to the historical avant-gardes – did we begin to look at the artist with greater attention. ; thus, after a series of episodic critical contributions3 – among which the thrust of Gabriella Belli in 1988 stands out which, rightly, contextualizes the figure of Marussig within the Venetian culture developed on the margins of the free exhibitions of Ca ‘Pesaro4 (1908 -1914) – it was possible to organize, in 2004, an exhaustive monographic exhibition at the Revoltella Museum in Trieste.

The predisposition to range between different disciplines and to make heterogeneous languages ​​their own, always declining them in an original stylistic code, must be traced back to the stimuli received, since the early years, in the native Trieste, a multicultural city historically projected into the orbit of Central Europe. Marussig, in fact, first trained at the Triestina Industrial School and, from 1900, thanks to the obtaining of a scholarship, at the Academy of Fine Arts in Venice where he attended the courses of Ettore Tito (figure school) and Augusto Sezanne (school of decoration). With an already composite cultural background, it opened up to the jumble of tendencies that animated the Venetian environment of the early twentieth century: a first crucial term of comparison had to be established with the instances of the Munich (1892) and Vienna (1897) secessions. ); equally important must have been the visual suggestions derived from post-impressionist painting both of French and English derivation. His adherence to the expressive modalities of European modernism also allowed him to appear among the ranks of the Venetian group – headed by Vettore Zanetti Zilla and composed, among others, by Cadorin and Casorati – at the Roman Secession of 19136.

It is interesting to note that Marussig’s early public debut took place in Rome at the 1902 exhibition of the Society of Amateurs and Connoisseurs of Fine Arts; on that occasion he probably had to bond with leading figures of the Roman scene – such as Arturo Noci – with whom, even in subsequent stays in the lagoon, he shared a pictorial approach aimed at recording the vibrations of light. From what can be deduced from a 1909 article that has remained unknown to critics until today, Marussig used to go into the most remote Venetian streets and paint en plain air in the company of the Roman Arturo Noci7 and an unidentified artist named Kratter.

From this perspective, and in line with contemporary Divisionist tendencies, he developed a language that was careful to restore the atmospheric and luministic values ​​of the landscape; at the same time, however, he inserted himself into the symbolist climate, sharpening the subtly melancholy character of his poetics. Landscapes-moods, constructed through skilful chromatic effects and imbued with an evanescent and lunar aestheticism, were repeatedly presented both at “institutional” and “frond” exhibitions. Especially in the early years of his career, Marussig managed to place himself in an intermediate position between the claims of the young dissenters of Ca ‘Pesaro – with whom he exhibited in 1908, in 1912 and again in 1913 – and the official nature of the Biennials. Over time, the Trieste artist became a permanent presence of the prestigious Venetian event: he was welcomed for the first time in 1905 – twenty years old and still a student of the Academy – and then in the editions before and after the two world wars. Marussig’s particular symbolist etymology gained considerable visibility especially during the 1907 Biennale; on that occasion he had the opportunity to meet established artists – such as Chini, Nomellini, Previati – exhibiting in the famous Sala del Sogno the canvas Weeping Willow, a suggestive naturalistic vision at dusk crossed by pearly veils and pervaded by a sense of sidereal stillness.

Having assimilated the lessons of the most prominent exponents of the Nordic secessions, Marussig created, up to the early 1920s, canvases – mainly of Venetian subjects – increasingly decorative, schematic and two-dimensional. It is no coincidence that the critic Antonio Maraini, in one of his writings of 1922 focused on detecting foreign influences on contemporary Italian art, counted Marussig among those who had “taken up, albeit modifying it according to their own orientation, the slender elegance and refined by Klimt »9.

To the usual easel production, the Trieste artist soon turned to painting with an environmental breath – in 1911, among other things, he created the external fresco of the Casa Nardi in Venice – and to architecture: in 1909, he elaborated the project , of medieval inspiration, of the new municipal building of the city of Trieste. The consonance with the world of construction meant that Marussig, during the Thirties, collaborated as a critic in the review “Rassegna di architettura”.

In 1916 he moved to Milan. The affirmation in the Lombard capital passed through an important personal exhibition at the Pesaro Gallery (1920) and, above all, through the achievement of various teaching assignments: between 1918 and 1937 he held the position of teacher at the Humanitarian, while from 1937 he was the holder of the chair of Ornate at the artistic high school of Brera.

In the 1920s and 1930s he intensified his work in the field of applied arts, interior design, monumental decoration – from 1926 he acquired the role of professor of drawing and mural painting at the Toschi Institute in Parma – and, finally, of graphics. . In the publishing sector he created decorative friezes for “Le Vie d’Italia” – magazine of the Italian Touring Club – and covers for both periodicals – for example “Dedalo”, “Pan”, “Emporium”, “La Rivista Illustrata del Popolo d ‘Italia’ – both for volumes by Ugo Ojetti and Gabriele d’Annunzio.

The Vate esteemed Marussig to such an extent that, in 1918, he entrusted him with the care of the staging – sets and costumes – of the tragedy La Nave, performed at the Scala in Milan and set to music by Italo Montemezzi. Also on the commission of d’Annunzio, the Trieste artist was busy, in intermittent times, with the demanding decoration works of the Vittoriale.

At the end of the 1920s, in a cultural climate oriented towards the so-called Return to order, Marussig arrived at an austere, synthetic classicism, tinged with metaphysical moods and echoing, on the one hand, the epic essentiality of Mario Sironi’s work, on the other hand, the rarefied formalism of certain Sarfattian authors of the twentieth century with whom, not surprisingly, the Trieste artist found himself exhibiting in 1929 and then in 1932. On this basis Marussig created views of the city until the end of his career in ruins and still lifes composed of a few and selected elements – geometric solids, broken columns – rhythmically reiterated according to an anti-naturalistic taste and, in some way, akin to the results of geometric abstraction.

“Painter, interesting to the mind and pleasing to the eye […] an elegant illustrator of books and magazines, an elegant, albeit a little too sophisticated, designer of wall posters and a skilled and brilliant set designer” (Vittorio Pica, Galleria Pesaro 1920) 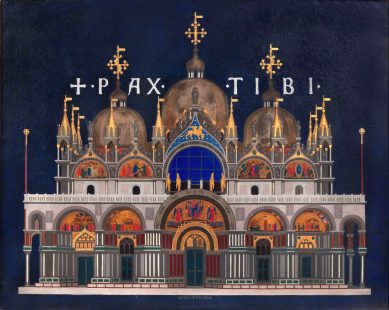 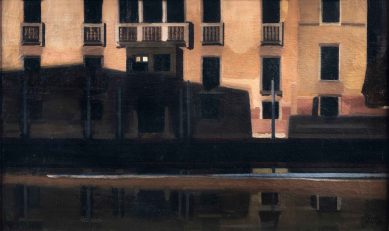 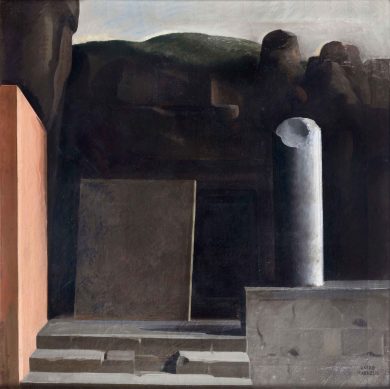 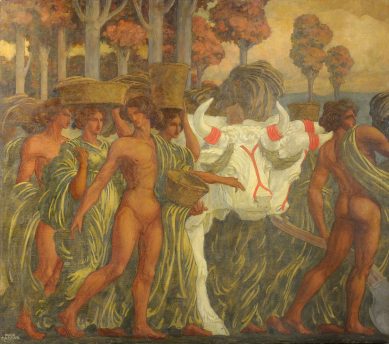 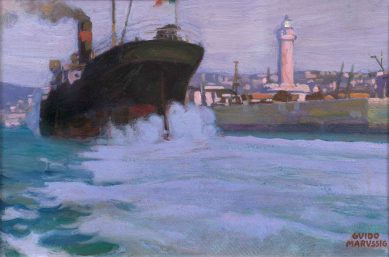