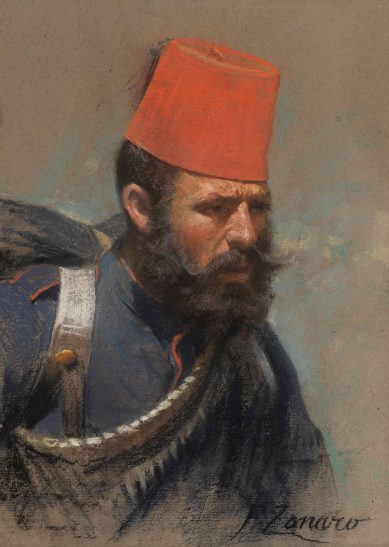 
From Venice to Istanbul. An Italian Painter to the Court of the Sultan

An exponent of the generation of artists born in the 1850s, whose career developed between realism and new Impressionist tendencies, Fausto Zonaro (Masi, Padua, 18 September 1854 – Sanremo 19 July 1929) is best known for the views and scenes of daily life he produced during his twenty-year stay in Istanbul. Generally counted among the Orientalist painters, he gave an entirely personal interpretation of the Orient, free of any fairytale intentions and closer to the documentary nature of Edmondo De Amicis’ travel reports.

It is during his formative years, which were fragmentary due to his family’s modest economic situation and abruptly interrupted by his call to arms, that we can trace Zonaro’s cultural coordinates. At the Academy of Fine Arts in Verona, he studied in the company of Giacomo Favretto, Angelo Dall’Oca Bianca and Alessandro Milesi. The move after 1880, first to Rome and then to Naples, gave the painter new ideas. The Venetians, Guglielmo Ciardi and Luigi Nono, as well as the Neapolitans, Michele Cammarano, Edoardo Dalbono, Francesco Paolo Michetti and Vincenzo Migliaro, were the reference points for his views and above all for his vivid impressions of city life. Naples, in particular, was a revelation: “Yes, behind me I had left Naples, the enchanting siren of colours, Naples that revealed to me what it was to be an artist, where I struggled with intense faith, intoxicated by that marvellous sky, powerfully attracted by the customs of its people that I rendered in my paintings, where I had the esteem of the great Domenico Morelli”[1]. 1883, the year of his debut exhibition, was characterised by feverish activity. The artist exhibited fifteen paintings at the Turin, Genoa, Florence and Naples promotions and at the International Exhibition in Rome. His production is partly dispersed, but well documented in the press of the time, and although it is part of the successful genre painting trend, it strikes the critics for its technique and quality[2]. A reading of Zola’s L’oeuvre, published in 1886, helped to give a more social slant to the lively realism of the scenes of city life, accompanied by a production in which life in the fields is transfigured through female figures joyfully immersed in nature. Favretto and Michetti were thus the two poles around which the artist’s language was defined. Between 1883 and 1888 he presented a series of iconic images at major national exhibitions, ranging from single figures (The Soap Man, 1888; Pearl threader, 1884-88) to more complex compositions (O’ pazzariello or The Auctioneer, 1886; Venetian folk festival, 1887; To the Redeemer, 1887) and to rural lyricism (The Devil’s Tail; After the Game; Love in the Fields, 1888). The final stage in Zonaro’s training, however, was his move to Paris in 1888 to work in the footsteps of Impressionism and Boldini and Zandomeneghi, whom he met personally. A looser, more concise brushstroke characterises the works of the late 1880s, such as The Model (1888, private collection) or Forest Flowers (1889, Istanbul, Sakip Sabanci Museum), in which the theme of the peasant girl with a pumpkin appears to have been brought up to date with the colours of Michetti’s contemporary production.

At the end of this erratic itinerary, which had led him to travel incessantly for almost a decade, Zonaro returned to Venice, strengthened by his wealth of cultural experience. Here he and his young pupil Elisa Pante planned a trip to the Orient, inspired by the travel books by Théophile Gautier and Edmondo De Amicis. The enterprising Elisa was the first to travel to Istanbul in 1891, heedless of the difficulties of the journey, where she was joined on 5 November of the same year by the artist, who brought with him most of his masterpieces (Pearl Threader, Forest Flower, Grand Canal to Salute, Devil’s Tail, Feast of the Redeemer). Shortly afterwards, the couple married in the Saint Esprit cathedral.

Zonaro approached his new environment with the tools he had acquired during the 1980s, which enabled him to explore both the landscape and the daily life of the inhabitants of Istanbul. The beauties of the East are investigated in search of an ancient and ancestral world. The artist immersed himself in the luxuriant landscape reflected in the water through a painting of light, the methods of which he had learnt in Venice from the masters of lagoon vedutism, but he was also able to interpret a people whose rituals, spirituality and ancient, ancestral customs contrasted with the rigid rules and conventions of Western modernity.

During these years, Elisa weaved a fundamental web of relationships. Understanding the importance of reproducing and disseminating her husband’s work, she went to Paris to graduate in photography. Back in Turkey, she became a respected photographer and, as a woman, was allowed to take portraits in the sultan’s harem. The publication in November 1892 of The Auctioneer on the cover of the magazine “Illustrirte Zeitung”, followed by an article in the French-language newspaper “Le Stamboul”, brought Zonaro her first international recognition in the Turkish capital. The Russian ambassador Nelidov, enthusiastic about his paintings, gave him a salon to host a painting school attended by the Western aristocracy and members of the sultan’s court.

While in the early days Zonaro devoted himself mainly to views, travelling through the different districts of the city and reproducing glimpses of fountains, mosques, cemeteries and the sea, in 1896, struck by a parade of the Ertugrul Cavalry Regiment on the Galata Bridge, he conceived his first committed composition, offered, through Nelidov’s mediation in agreement with the Italian embassy, to Sultan Abdülhamid II. Appointed court painter, he conducted his research on two parallel levels, producing works both for official commissions and for the international public. A more formal language was used for the portraits and large history paintings commissioned by the Sultan, who also asked him to paint portraits of his family members and allowed him to work in consecrated places that were generally inaccessible. Among his works in this genre are a series of canvases celebrating the entry of Mohammed II into Constantinople on 29 May 1453 and portraits of the German Emperor Wilhelm II and his wife on a visit to Istanbul in 1897. The battles of recent Italian history, described in Cammarano’s large canvases, are the model for The attack, a monumental painting of 1897 dedicated to an episode in the Greek-Turkish war, which reflects the Sultan’s desire to conform to an international language in his choice of iconographic model. On the other hand, the more exotic features of the daily life of the inhabitants of Istanbul emerge in the production intended for the market. Much space is devoted to the world of women, the protagonists of paintings such as Odalisques embarking or the Hamam triptych, and to the theme of dervishes. The artist carried out real ethnographic research, capturing the expressions of the dervishes at the moment of ecstatic abandonment and of the onlookers who participated in the event with admiration.

For twenty years, Zonaro was a key figure in Istanbul’s high society and enjoyed personal success and satisfaction, which was abruptly interrupted by the 1909 coup d’état and the exile of Abdülhamid II. Returning to Italy in 1910, he found a new home between land and sea in San Remo, where he continued to work, mainly producing views, for the international elite with whom he had forged close relations. He died on 19 July 1929.

“His canvases […], Turkish in their background and Turkish in their form, are the work of an artist who, over a period of fifteen years, has put his talent and his knowledge, his heart and his mind, his brush and his colours at the service of the vision of Art achieved in the face of this Nature, inexhaustibly lavish with the treasures of an immense, surprising and constantly renewed palette”. 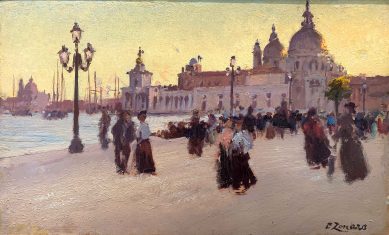 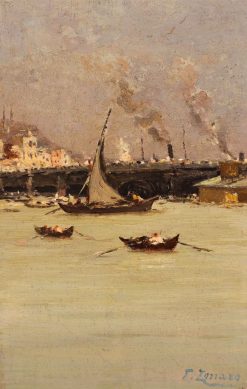 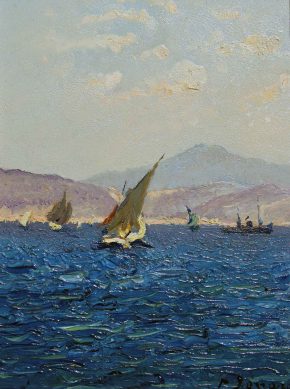 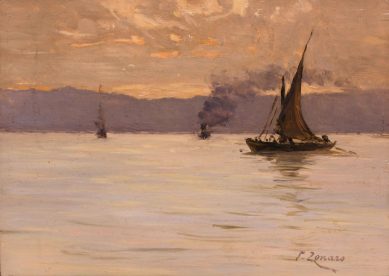 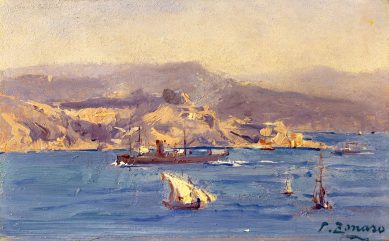 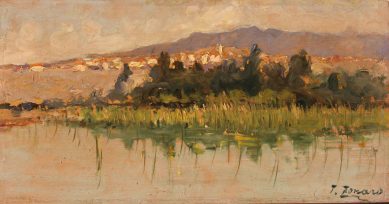 Reflections on lake near Bussana (1913) 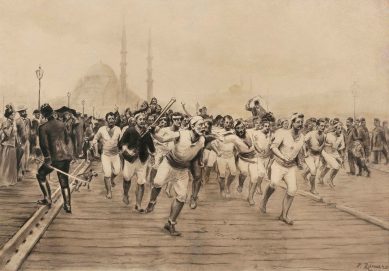 Study for Yangin Var! (The Fire) 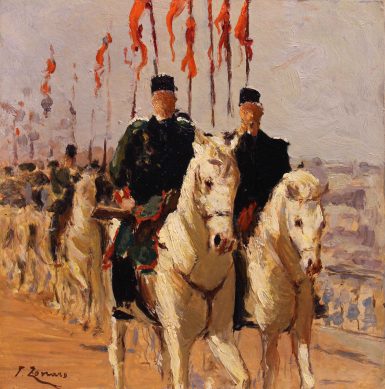 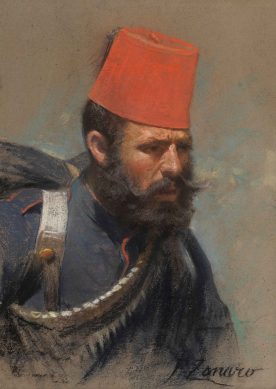 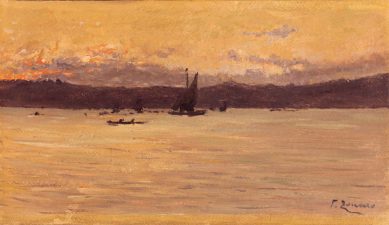 The Bosphorus at Dawn 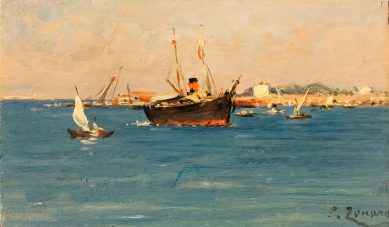