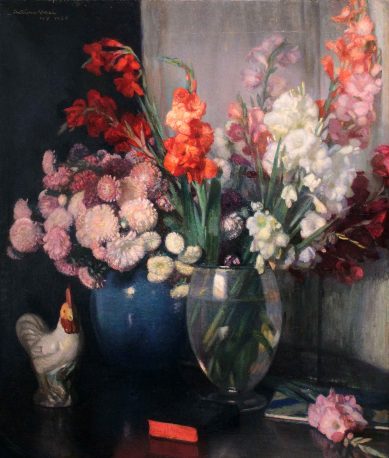 The rediscovery of the figure of Arturo Noci, a protagonist of Roman painting in the first two decades of the 20th century, is due to a renewed critical interest in the ‘Secession’ period, as recent studies have shown[1] When in 1913 he exhibited at the ‘First International Art Exhibition of the Secession’, where he presented a portrait and two Divisionist landscapes[2], Noci was in fact at the height of his career. Involved in the steering committee from the outset, the painter played a leading role in the dissident group. In particular, his position was decisive between 1913 and 1914, when Camillo Innocenti, who was busy staging a rich personal exhibition at the prestigious Bernheim-Jeune gallery in Paris, entrusted him with the organisational helm[3]. At the group’s second exhibition, Noci once again presented a portrait paired with two strictly Divisionist landscapes. Among these was the painting that can be considered the manifesto of his interpretation of Divisionist technique, centred on refined harmonies of warm tones: L’arancio (Rome, Galleria d’Arte Moderna), purchased there by the City of Rome.

The outbreak of the First World War inexorably conditioned the fate of the ‘Secession’ group, which was deprived of its international ambitions in the next two exhibitions. Noci, however, continued to exhibit with unchanged intensity: his success (in 1916 he was nominated Academic of Merit for the class of painting at the Accademia Nazionale di San Luca) convinced him to take new paths in painting, working in complete creative freedom and engaging in more modern chromatic and compositional solutions. This was a moment of great inspiration for the artist, who continued to receive numerous portrait commissions. In his search for a pictorial language free from conventions, Noci gradually renounced pointillism, abandoning it definitively at the beginning of the 1920s: instead, more attention was paid to drawing, perhaps in response to a reflection on the graphics of the second generation Deutsch-Römer. Some of his most expressive graphic works date back to the war period, executed in charcoal or pastel, a technique he was particularly fond of.

With the war over, the chapter of the ‘Secession’ also came to an end. The ‘Società Amatori e Cultori di Belle Arti’ (Society of Fine Art Lovers and Connoisseurs) ceased to fight and immediately returned to play a fundamental role in documenting developments in contemporary art. At the 1918 exhibition, where he was one of the members of the jury for acceptance and placement, Noci exhibited three paintings executed during the previous year, with which he wished to offer an insight into his latest experiments: The Green Shawl, Rebirth and Lizard. The latter, recently found in a private collection, was fully in line with the artist’s search for chromatic harmonies (reminiscent of Whistler) from the early years of the 20th century, as contemporary critics noted: “This painting depicts a slender young woman with large glaucous eyes, an olive-coloured face, and a person dressed in a green jumper leaning against a backdrop of ivy: green on green, Lizard! “Green on green, Lizard!” wrote an anonymous reporter for the daily newspaper Il Piccolo; “The value of the painting lies in the voluble delicacy with which the different shades of a single colour emerge under the thin veil of the general intonation”[4].

By the time he exhibited at the Venice Biennale in 1920 – the first of the Venetian exhibitions after World War I – Noci’s artistic language had been completely renewed: the divided touch had almost completely disappeared and his attention had shifted from colour to light, from the serpentine line to the solidity of the volumes. The themes had also changed: the artist had moved on from voluptuous nudes and fashionable portraits to scenes of everyday life with housewives and farm workers. However, it is in the landscape genre that the renewal of his painting is perhaps most evident. While in the first two decades of the 20th century he had a preference for melancholic views and soft lighting, so much so that he earned himself nicknames such as “the painter of sad things”[5] or the – less flattering – “twilight bat”[6], in the early post-war period Noci produced wide-ranging views, with crystal clear luminosity, rendered with broad brushstrokes and large colour fields. In addition to the views he painted in Positano (1919) and Pellestrina (1920), particularly illustrative are those he painted in Terracina in 1921 and exhibited the following year at the Venice Biennale and the annual exhibition of the Società Amatori e Cultori di Belle Arti. In the latter venue, Noci presented three paintings: The fiumarella of Canneto, The Turning Point and the Portrait of Aristide Montani, a high-ranking officer and vice-president of the Property Owners’ Association of Rome and its province, who used to host the painter in his properties in Terracina during his frequent holiday stays.

Even in bourgeois portraits, to which he continued to devote himself with his usual success, Noci demonstrated his artistic maturity. Among the commissioned portraits he painted in this period, mention must be made of Marcella Rossellini, sister of the famous director Roberto Rossellini (with whom he worked for a long time as scriptwriter and script writer). The painting, which was presented at the Venice Biennale in 1922 together with two landscapes of Terracina, is one of the high points of Arturo Noci’s portrait production. The work reveals a reflection on Klimt’s portraiture, which Noci was able to study closely not only at the Venice Biennale and the great international exhibition of 1911 at Valle Giulia, but also at the second exhibition of the Roman “Secession” in 1914, where the Viennese artist exhibited the portrait of Mäda Primavesi (1912, New York, Metropolitan Museum of Art). The slightly flattened frontal perspective, perhaps reminiscent of Japanese prints, as well as the pose and richly decorated background of the Noci’s Portrait seem to have been inspired by Klimt’s painting, at that time one of the most influential foreign artists admired – and often emulated – by Italian painters.

The portrait of Marcella Rossellini was the last one Arturo Noci presented at the Venice Biennale, in which he had participated at every edition, with constant success, since 1901. On 27 April 1923, in fact, he left Naples on the ship “Conte Rosso” for New York, where he was to move and never return. The artist had gone to America to ‘paint some of his strong portraits’[7] of important figures of the rising middle class, with whom he had already been in contact during his Roman years. The first of these commissions was probably that received by William Guggenheim[8], a wealthy industrialist and ‘fellow for life’ of the Metropolitan Museum of Art, for the portrait of his wife Aimee Lillian Steinberger. The success of this portrait was such that he received numerous other commissions from New York high society, especially from the ever-widening circle of wealthy Italian-American businessmen. They, however, seemed to prefer paintings with a conventional approach, a fact that induced him, in the years that followed, to quell any experimental inclination in the portrait genre. The comparison with the painting that was developing in Italy in the meantime made the gap between his production and that of his colleagues on the other side of the ocean clear to Noci himself. Perhaps it was also because of this realisation that the painter began to work in an increasingly solitary dimension, producing portraits that were not particularly inspired and were heavily indebted to the photographic medium.

At the same time, however, Noci produced artistically freer works in which he gave full expression to his irrepressible nature as a colourist, including female nudes, urban views (the series of views of Central Park from above) and refined floral still lifes. “[…] he dedicated himself to portraits not forgetting landscape work which included type work and still life – in which the graciousness the richness of colour and the sweep of his touch harmonized genially”, recalled the magazine “Leonardo” in 1939 in an article entirely dedicated to him[9].

In fact, although the artist’s fame was mainly linked to his work as a portrait painter, some of his main clients also showed an appreciation for his skill in landscape and floral compositions. In particular, the banker Lionello Perera – with whom the artist had been in contact since at least 1924[10] – and his son Guido. In addition to portraits of his family, the Perera family’s collections included still lifes, figures and landscapes, including some of the works from the Roman years that Noci had brought with him to America in the event of a solo exhibition. The Perera collection included famous exhibition paintings such as Portrait of the Baroness Budberg (1910), Night in Burano (1912) and La fiumarella di Canneto (1921). From the American period, however, the collection included three elegant still lifes, all three executed in the early 1930s. They have in common the square format of the canvas and the characteristic of the partly or completely dark background, from which the bright tones of the flowers emerge strongly. Particularly noteworthy is the Still Life with Gladioli from 1930, whose considerable size – it is his largest still life to date – seems to suggest that it was commissioned. Here Noci uses a clean, analytical style of painting, giving the composition a sense of silent suspension that recalls the atmospheres sought by the painters of “magic realism” of the same period. This is even more evident if one compares it with the Still Life with Flowers and Fruit of 1933, with its quick, full-bodied brushstrokes, probably executed in the space of a few hours; or with another Still Life with Gladioli, painted in 1934, which the artist eloquently entitled Impression (private collection).

Noci continued to have professional and friendly relations with the Perera family until the end of his life, as evidenced by the portraits of James Major (1951) and Sharon Holmes (ca. 1952), Guido Perera’s brother-in-law and niece respectively. An article in the newspaper ‘Il progresso italo-americano’[11] also documents Noci’s presence at the reception in honour of the mayor of Genoa, Vittorio Pertusio, held at Perera’s house in June 1952. It was his last important social event: a few months later, in November, the artist was hit by a speeding car. Admitted to Columbus Hospital, he died in August 1953.

[8]  Guggenheim had been nominated Commendatore of the Order of the Crown of Italy on 23 September 1920, a few months after Noci himself had been appointed Cavaliere, together with, among others, two rich American industrialists, J. Leonard Replogle and Eugene Meyer, for the huge financial support given to Italy during the war. See Men you should know about, in “Engineering and Mining Journal”, 1920, vol. 110, no. 14, p. 684.

“Arturo Noci triumphs with […] paintings that show us a new youthfulness in him, rich in colouristic achievements and happy expression”.  (Guido Guida, 1921) 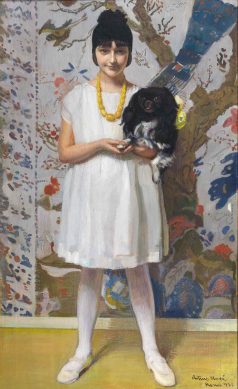 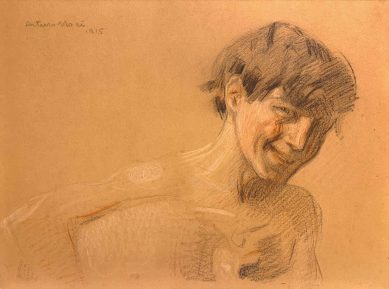 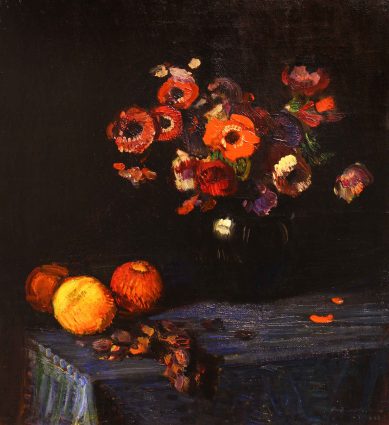 Still life with flowers and fruit (1933) 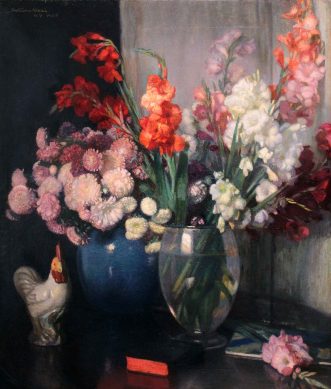 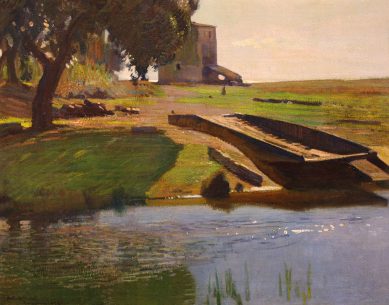 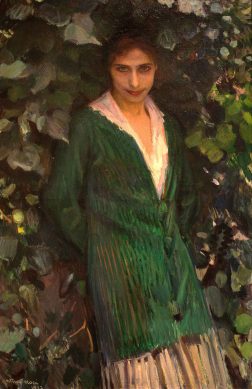 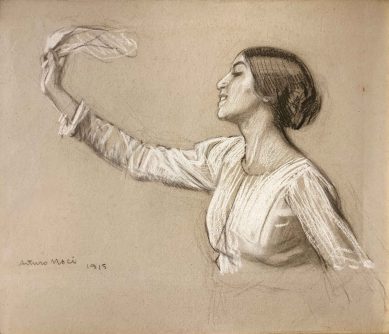 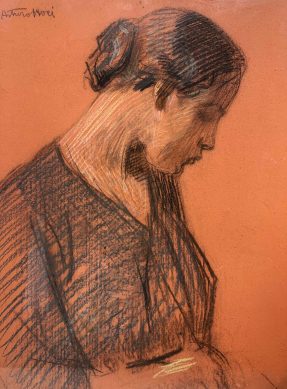