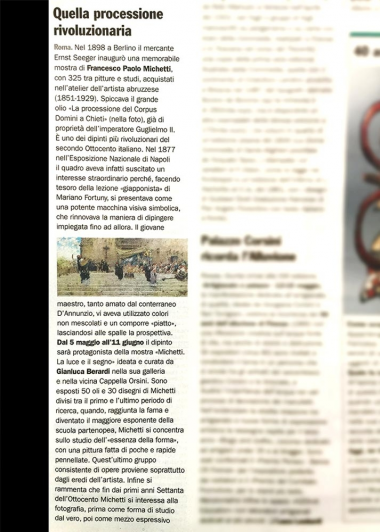 The Journal of the Art: “That revolutionary procession”

The exhibition “Michetti – The light and the sign” presents the public with an important set of works by the Abruzzo master, over eighty, in which the path from the light painting of the first period to the search for the essence of the typical form of the last is evident . Perhaps his most important painting represents the youthful Michetti, The Procession of Corpus Domini in Chieti, while the following steps are well explained by a significant nucleus of works, mostly coming from the artist’s hereditary fund.

To underline the presence in the exhibition of Corpus Domini, a painting presented with fanfare at the National Exhibition of Naples in 1877 and soon became part of the prestigious collection of the Emperor of Germany: undoubtedly one of the most important and significant paintings of the second half of the nineteenth century in Italy. With this work, the author took the leadership of the emerging Neapolitan school and influenced its guidelines for a decade, with repercussions in all regional schools.

Michetti, honored Domenico Morelli with the reference to the Madonna della Scala d’oro in the central figure and assimilated with acuity the Japonist lesson of Mariano Fortuny, conquered the public and critics, albeit amid the inevitable controversies. It is the art critic, as well as painter, Francesco Netti, who perfectly identifies the qualities of the painting: the “true progress” consisted in the elimination of that “base tint” that “dampens”, “poisons”, “and insensibly lowers the whole intonation of the picture “.

In the work, “light and cold colors” predominate in imitation of Japanese painting, which proceeds precisely by “local and whole tones” and with a flat composition that cancels the perspective depth. This is the foundation, in Netti’s eyes, of the Empire of White, a new painting of light, exemplified on the lesson of Fortuny, which effectively renews Italian painting in the wake of international naturalism.

When Michele Uda, another conservative art writer, railed against the new pictorial trend accusing it of “intentionism” and “impressionism”, it is not far from the famous criticisms launched by Louis Leory with the article the “Mostra degli Impressionists “published in the Charivari on April 25, 1874. And this revolutionary operation is carried out by Michetti in Corpus Domini with an ease – Netti wrote that the difficulty of creating in general makes the artist suffer while the Abruzzese master” makes you enjoy “- which on this exhibition occasion it is once again under the eyes of all.