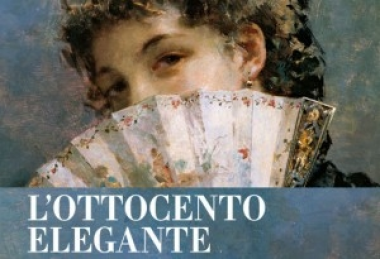 The great exhibition scheduled from 29 January to 12 June 2011 at Palazzo Roverella, in Rovigo, is an elegant and folkloric nineteenth century. The vital and elegant nineteenth century of large à la page lounges, races, dances and receptions. And, at the same time, of popular festivals, carnivals, masked dances and meetings among the foliage, disguises and idylls.

Then the nineteenth century of dreams populated by fleshy odalisques and enchanted by the disturbing scents of the East. It is a positive and serene exhibition that with which the Cassa di Risparmio di Padova and Rovigo Foundation, the Municipality of Rovigo, the Accademia dei Concordi take up the classic trend in the exhibition program of the Palazzo: that of painting in Italy at the turn of the last two centuries. The attention of Dario Matteoni and Francesca Cagianelli, who are the curators of the exhibition, focused on the thirty years 1860 – 1890.

Three decades of great hopes, euphoria, trust, initiated, and in some ways activated, by the unification of the Kingdom of Italy. It was certainly a period of light and shadow and this exhibition chooses, not for celebratory intent and much less for the choice of hiding other realities, to highlight the former rather than the latter. Wanting to account for a particular vitality and vitalism, perhaps never relived by the subsequent history of art in Italy.

Color and sensuality that they find in a Spaniard, Mariano Fortuny, their prophet in painting. Fortuny from his homeland had brought warmth and color, the taste to transpose the joyfulness and playfulness of life onto canvas, making painting the colorful mirror of these sensations. Palettes of bright colors, canvases of virtuosic elaboration. Sensations that in the various schools of the country take on very different peculiarities: from the almost calligraphic taste of some, to the brightness – the so-called “White Empire” – in others, to the eighteenth-century tradition of colorism for others.

Just as different are the “stories”: from the celebration of homeland events, to social chronicles, sometimes steeped in religiosity, but above all a sharing story of a bourgeoisie that was redefining its role in the new unitary state. The mechanism of mirroring that involves this bourgeoisie is evident and that will be able to offer a solid basis for a success in this painting that reached without bending up to the 1980s: “The fashionable ladies and gentlemen, the rich bourgeois” wrote the painter in 1877 and Apulian critic Francesco Netti «found themselves in those works. They saw the same fabrics they were wearing, the rugs they had at home, the luxury they lived in, and then satin shoes, white hands, bare arms, small feet, pretty heads. Those painted figures were idle just as they were.

At most they looked at an object, or blew each other with a fan. The busier ones played some music or read a novel. It was their portrait or rather their apotheosis. And he competed for them ». Exhibition promoted by the Cassa di Risparmio di Padova and Rovigo Foundation, the Municipality of Rovigo and the Accademia dei Concordi. With the participation of the Province of Rovigo, the Municipality of Fratta Polesine and with the contribution of the Rovigo Chamber of Commerce. With the patronage of the Presidency of the Council of Ministers, the Ministry for Cultural Heritage and Activities, the Ministry of Foreign Affairs and the Veneto Region