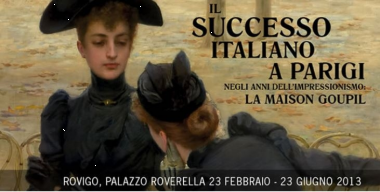 Event: La Maison Goupil – The Italian success in Paris in the years of Impressionism

The works of Italian artists of the second half of the nineteenth century, who worked for the famous Galleria Goupil in Paris, are back together for the first time. A Maison that brought together a real school of painters from different backgrounds and backgrounds, French, Italian, Spanish, Hungarian, who united by a common project and feeling, painted scenes of everyday life and genre, set in elegant interiors or in shady gardens, costume scenes, urban views and animated landscapes.

Works that became, thanks to the tireless promotion and dissemination of the Gallery, immediately popular and appreciated by collectors, critics and merchants, creating and nurturing a European and international taste for collecting, whose effects will continue well beyond the early twentieth century.

The exhibition, curated by Paolo Serafini, was born from the study of the materials preserved at the Musée Goupil in Bordeaux, which houses thousands of engravings and photographs of works belonging to the gallery, and at the Getty Research Institute in Los Angeles, which has the original records of all the works purchased and sold by the Maison.

For the first time, this exhibition will showcase the original works alongside some of the stunning etchings produced by the Maison with different techniques and formats (etching, photo-painting from the original, photography, photoengraving) in the desire to reach the widest customer base with a product high quality at low cost, easily placed in bourgeois homes of that time. Maison Goupil and Italy reconstructs the exact consistency of the Italian works owned by the Gallery, and testifies to the great success our artists had in Paris during the years of Impressionism.