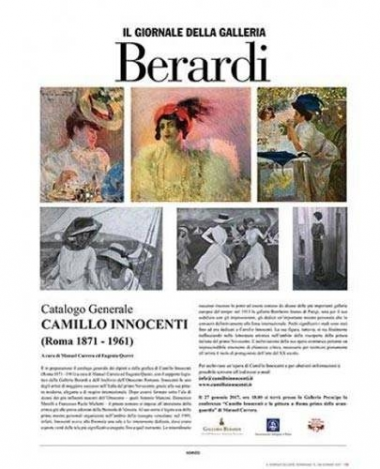 The general catalog of paintings and graphics by Camillo Innocenti (Rome 1871 – 1961) is being prepared by Manuel Carrera and Eugenia Querci, with the logistical support of the Berardi Gallery and the Roman Nineteenth Century Archives. Innocenti was one of the most successful artists in Italy in the early twentieth century, thanks to his modern, elegant and international painting.

After having trained under the wing of some of the most influential masters of the nineteenth century – such as Antonio Mancini, Domenico Morelli and Francesco Paolo Michetti – the Roman painter already attracted the attention of critics at the first editions of the Venice Biennale.

One of the first personal exhibitions organized as part of the Venetian exhibition is linked to his name: in 1909, in fact, Innocenti had a room entirely dedicated to him at the Biennale, where twenty of the most significant paintings executed up to that moment were exhibited.

The extraordinary success he received led him to be contested by some of the most important European galleries of the time: in 1913 the Bernheim Jeunes gallery in Paris, known for his association with the Impressionists, dedicated an important personal exhibition to him that definitively consecrated him to fame international.

Few significant studies have so far been dedicated to Camillo Innocenti. His figure, however, is finally reappearing in art literature as part of the rediscovery of early twentieth century Italian painting. The archiving of his work therefore constitutes an essential instrument of critical clarity, necessary to fully restore to the artist the role of protagonist of 20th century art.

To archive a work by Camillo Innocenti and for further information, you can write to the e-mail address:

the conference “Camillo Innocenti and painting in Rome before the avant-garde” by Manuel Carrera.