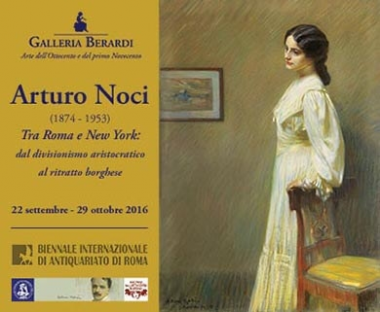 On the occasion of the International Antiques Biennial in Rome, the Berardi Gallery will present a monographic exhibition dedicated to the painter Arturo Noci. In the Biennale there will be a selection of works while the exhibition will take place simultaneously at the headquarters of the Galleria in Corso del Rinascimento 9.

The sales catalog of this exhibition dedicated to Arturo Noci is offered in a truly unusual guise, that of a real and own monograph dedicated to the author. The reasons are to be found in the recovery of such a representative and heterogeneous series of paintings by the artist, such as to allow this systematic study which has the task of returning to the master his proper place in the history of Italian figurative culture.

The decision to move to New York in 1923 made by an Arturo Noci at the height of success – with all his works in tow is one to think since most of them have been traced back to America – caused a progressive clouding of his artistic personality, now partially dissolved as regards the activity of portraitist thanks to the accurate and recent retrospective held at the Municipal Gallery of Modern Art in Rome Arturo Noci (1874 – 1953).

Figures and portraits of the Roman years. Here we wanted to broaden the investigation – thanks to a lucid and close critical study signed by Manuel Carrera, head of the Noci Archive – to the entire career of the master, from his Roman beginnings to the international affirmation of New York; a surprising modernist painter emerges, characterized by a multifaceted production.

Noci in fact suddenly passes from the genre of art to fashion derived from Giulio Aristide Sartorio but enlivened by the comparison with the naturalism of Nino Costa – an unforgettable stop from the games that some girls play in the sunny shadows of Villa Borghese – to the irresistible elegance of the nudes they conquered. also the king of Siam; hence the access to the commissions of high-level international portraiture, from the aristocracy to the jet set of the entertainment world.

Exemplary in this sense are two masterpieces such as Portrait in Yellow, where Whistlerian elements and suffused Divisionism combine to create one of the most refined portraits of the Italian twentieth century, and the tenebrous femme fatale Lyda Borelli.

At the same time as the success of the commissions, his open adhesion to the Roman Secession projects him among the experimenters of divisionism with completely personal results, easily recognizable in works such as L’arancio (Rome, Municipal Gallery of Modern Art), the Cantiere dei sandals (Terracina) o Morning.

With the 1920s, Noci gradually lost interest in the divided touch and concentrated, in particular in the stays in Terracina and Pellestrina, in a search for severe and geometric shapes, returned by characteristic narrow and elongated taches and a vivid color; while witnessing the suggestion for the atmosphere of the Return to Order, this new production returns the apex of Noci, a master with a strong pictorial character and infinite class.