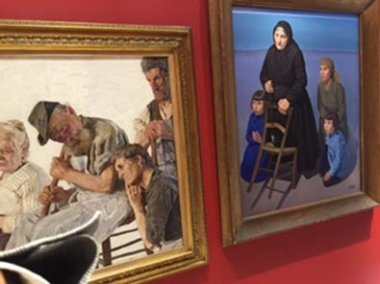 Event: FROM GIOTTO TO DE CHIRICO Hidden treasures (loans from the Berardi Gallery)

FROM GIOTTO TO DE CHIRICO Hidden treasures
A project of the Lombardy Region
curated by Vittorio Sgarbi
Al MuSa – Museum of Salò.

On the occasion of the exhibition curated by Vittorio Sgarbi, the Berardi Gallery lends two particularly significant works: Thunderstorm by Ettore Beraldini, which communicates well with the magical realism of Cagnaccio di San Pietro, and Mother with child by Pietro Gaudenzi, which reflects the climate of Return to the order of the thirties.

“The hunt for cadres has no rules, no goals, no landing places, it is unpredictable. You don’t find what you are looking for, you look for what you find. Sometimes far beyond desire and expectations ”. This is how Vittorio Sgarbi describes the mystery of collecting: “The interest in what is not there”. Hence the idea of ​​the great exhibition that opens at the MuSa di Salò: to tell through precious “hidden” treasures, the unfolding of the history of Italian art, from Giotto, the artist who renewed painting, as well as Dante, his contemporary , is considered the “Father” of the Italian language, to Giorgio De Chirico who, fascinated by ancient art, was the main exponent of metaphysical painting, through which he attempted to reveal the most mysterious aspects of reality.

The exhibition thus understood is therefore a natural extension of the extraordinary exhibition ‘The Treasure of Italy’ held at the Universal Exposition of Milan in 2015, in which the genetic variety of great masterpieces conceived by intelligence, moods, emotions that refer to the places, lands, waters, winds that generated them.

The “genetic” peculiarities of the different areas of the Italian “artistic geography” will also be verifiable on the occasion of this new great exhibition that stems from the desire to illustrate the Treasure of Italy through a reasoned selection of almost two hundred works, including paintings and sculptures ” hidden and protected ”in the most important Italian private collections. Over a period of over seven centuries, from the end of the thirteenth century to the beginning of the twentieth century, from Giotto to De Chirico, the evolution of styles, currents, junctions and main figures in the history of Italian art will be taken into account.

The exhibition opens with two magnetic marble female heads, the first “Italian” sculptures referring to a Frederick master of the mid-thirteenth century, followed by a panel with the Madonna by Giotto who, first, surpassed Giotto’s Byzantine schemes and the San Giovanni Evangelista by the famous Sienese sculptor and architect Tino di Camaino, the Cross of the Master of the Crucifix Crosses and the Processional Cross of the Vittoriale degli Italiani.

In addition to the paintings, the masterpieces of the sculptors Stefano da Putignano, from Puglia, author of an Angel with cartouche, by Giambologna, of which a noble Christ the Redeemer is exhibited, by the Florentine Giuseppe Piamontini, author of two important marble busts, stand out. by the Genoese Filippo Parodi, of which two sensational Allegories of Winter and Spring are presented.

The itinerary could not overlook some of the most significant personalities of seventeenth-century painting between Rome and Naples, such as Pomarancio, Giovanni Battista Gaulli known as Baciccio, Giuseppe Cesari known as Cavalier d’Arpino, Andrea Sacchi, Jusepe de Ribera, Battistello, the Master of Fontanarosa, Francesco Cozza, Luca Giordano and Francesco Solimena.