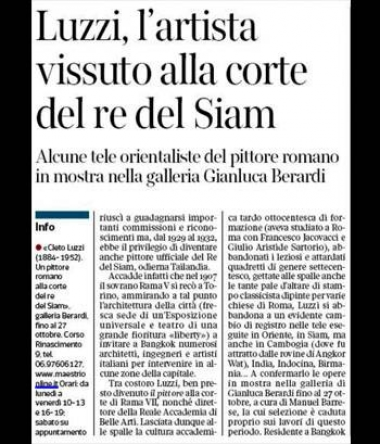 Corriere della Sera – Cleto Luzzi, painter at the court of the king of Siam

Event: Corriere della Sera – Cleto Luzzi, painter at the court of the king of Siam

Markets, spices, temples, mysterious protective deities, golden statues and snake charmers: there is all the typical baggage of ancient exoticism in the paintings of the Roman Cleto Luzzi (1884-1952), an artist who belongs to that large group of creatives, mostly lived at the turn of the nineteenth and twentieth centuries, gratified in life by laurels and official successes, and subsequently entered the cone of oblivion.

It is now up to the Berardi gallery – which has always been a space with a vocation for research and the study of figures to be recovered and recontextualized – to retrace Luzzi’s artistic journey. A path in some ways paradoxical, considering that during his career Luzzi not only managed to earn important commissions and awards but, from 1929 to 1932, he also had the privilege of becoming the official painter of the King of Siam, today’s Thailand.

In fact, it happened that in 1907 the sovereign Rama V went to Turin, admiring to such an extent the architecture of the city (fresh site of a Universal Exposition and theater of a great “liberty” flourishing) to invite numerous architects, engineers and Italian artists to intervene in some areas of the capital.

Among them Luzzi, who soon became the painter at the court of Rama VII, as well as director of the Royal Academy of Fine Arts. So leaving behind the late nineteenth-century academic culture (he had studied in Rome with Francesco Jacovacci and Giulio Aristide Sartorio), abandoned the affected and delayed paintings of the eighteenth-century genre, thrown behind also the many classicist altarpieces painted for various churches in Rome, Luzzi indulges in an evident change of register in the canvases executed in the East, in Siam, but also in Cambodia (where he was drawn to the ruins of Angkor Wat), India, Indochina, Burma …

This is confirmed by the works on display in Gianluca Berardi’s gallery until 27 October, curated by Manuel Barrese, whose selection fell precisely on the works of this period. Resident in Bangkok since 1929, the Roman painter seemed to be more open to experimentation, replacing his early oleographism with more agile and free colors, with pointillist brushstrokes.

All immersed in a predictable exoticism that led him to depict temples, monuments, naturalistic visions and tranches of daily life. Although not without some talent, Luzzi was later forgotten. And some retrospectives after his death (1956, Palazzo delle Esposizioni and Collegio Nazareno) were not enough to keep his name in vogue. Until today.