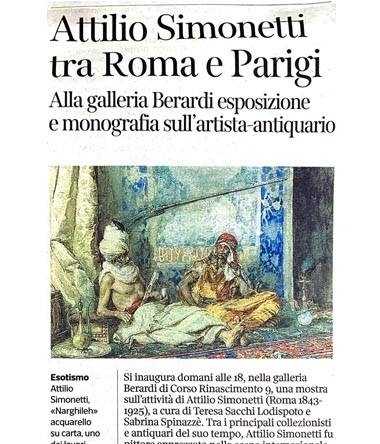 Attilio Simonetti between Rome and Paris

Event: Attilio Simonetti between Rome and Paris. At the Berardi Gallery exhibition and monograph on the artist-antiquarian

Among the main collectors and antique dealers of his time, Attilio Simonetti was a painter appreciated on the international scene, quickly establishing himself in the seventies and eighties of the nineteenth century between Rome, London, Paris and Madrid as a pupil of Mariano Fortuny, supported by the merchant Adolphe Goupil and sought after by collectors for its costume scenes and colorful images of local folklore.

At the peak of his success, which had seen him tread the scene of the Parisian Salons, Simonetti decided to abandon his artistic career to devote himself to the trade of works of art, becoming an internationally renowned connoisseur, with studies first at Palazzo Altemps and then in Via Vittoria Colonna, both destinations for exponents of the Italian and European aristocracy and the artistic world.