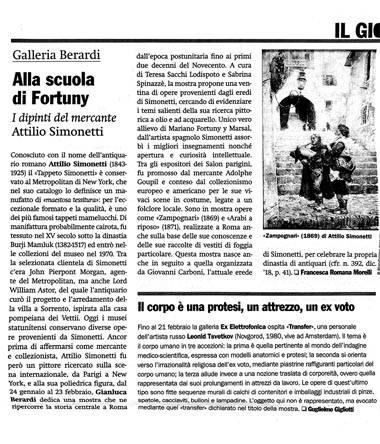 At the Fortuny school – The paintings of the merchant Attilio Simonetti

Event: At the school of Fortuny – The paintings of the merchant Attilio Simonetti

Known by the name of the Roman antiquarian Attilio Simonetti (1843-1925), the “Simonetti Carpet” is kept at the Metropolitan in New York, which in its catalog defines it as an artifact of “majestic weaving”: for its exceptional size and quality , is one of the most famous Mamluk carpets.

Today US museums hold several works from Simonetti. Even before establishing himself as a merchant and collector, Attilio Simonetti was however a sought-after painter on the international scene, from Paris to New York, and to his multifaceted figure, from 24 January to 23 February, Gianluca Berardi dedicates an exhibition that traces his central history in Rome from the post-unification period to the first two decades of the twentieth century.

from The Journal of Art