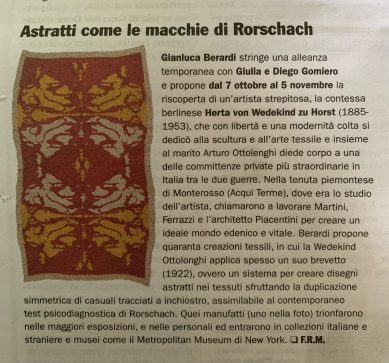 As abstract as Rorschach inkblots tests

Gianluca Berardi has formed a temporary alliance with Giulia and Diego Gomiero and from 7 October to 5 November will be presenting the rediscovery of a sensational artist, the Berlin countess Herta von Wedekind zu Horst (1885-1953), who devoted herself freely and with a cultured modernity to sculpture and textile art and together with her husband Arturo Ottolenghi created one of the most extraordinary private commissions in Italy between the two wars. In the Piedmontese estate of Monterosso (Acqui Terme), where the artist’s studio was located, they called upon Martini, Ferrazzi and the architect Piacentini to work and create an ideal Edenic and vital world. Berardi proposes forty textile creations, in which Wedekind Ottolonghi often applies one of her patents (1922), namely a system for creating abstract patterns in fabrics by exploiting the symmetrical duplication of random ink tracings, similar to the contemporary Rorschach psychodiagnostic test. These artefacts (one in the photo) triumphed in major exhibitions and personal exhibitions and entered Italian and foreign collections and museums such as the Metropolitan Museum in New York.