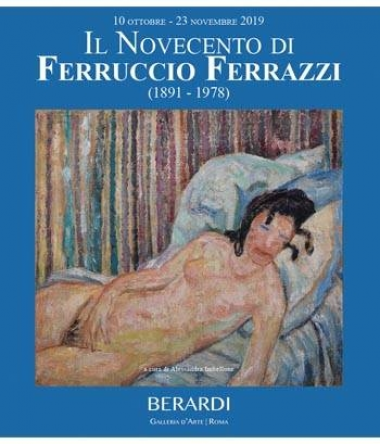 The twentieth century by Ferruccio Ferrazzi

Active on the scene for over seventy years, from 1907 to 1978, Ferruccio Ferrazzi was not an easy artist, not an easy one, only for geographical reasons arbitrarily included a posteriori in the enclave of the Roman School, from which he was indeed always distant. Gifted with an introverted and speculative temperament, idealistic and visionary, he lived and worked out of necessity in a secluded way, carrying out a research always characterized by strong autonomy.

Inexhaustible experimenter, he was attracted but never joined the avant-gardes or certain artistic movements, he did not belong to alliances and ideologies, always reacting to the stimuli and changes that these produced in an original and personal way, with inventions all his own. The exhibition traces for example his varied and multidirectional pictorial production, always tense, even when Ferrazzi was recognized by his contemporaries as one of the leaders of the return to order and painting of the fifteenth century, the conquest of modernity.

From its early debut in 1907, in a symbolist and Segantinian key, to the disruptive “prismatic room” of the exhibition of Amateurs and Cultors in 1916; from the study of the old masters, El Greco, Cézanne, the French nineteenth century and then Piero della Francesca, to the assimilation of German expressionist painting; from the return to order and the great successes obtained in Italy and abroad in the 1920s, with the victory of the Carnegie Prize, to the study of encaustic and the creation of important public commissions (mosaics, tapestries and murals) in the 1930s and Forty; from the restless period of the Apocalypses in 1943 in a new expressionist explosion of painting to the return to sculpture in the reconciled oasis of the garden of S. Liberata, in the Argentario.

An internal tension that has never faded characterizes the various appointments of his stylistic path, supporting a painting that stands out for its creative power, expression and originality that has no equal in Italian twentieth-century art.

The exhibition is accompanied by an in-depth study by Alessandra Imbellone, accompanied by a rich bibliographic and iconographic apparatus, which vividly and clearly reflects the richness and complexity of Ferrazzi’s human and artistic path. The attached illustrated register of the works exhibited in the artist’s life is offered as a valuable tool for further study.