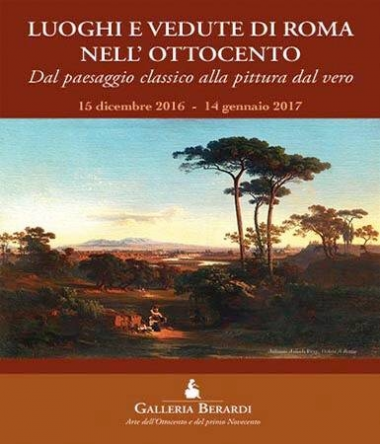 Places and views of Rome in the nineteenth century. From classic landscape to life painting

Among the main collectors and antique dealers of his time, Attilio Simonetti (Rome 1843-1925) was a highly appreciated painter on the international scene. Trained in the capital between the Accademia di San Luca and the informal Accademia di Giggi in via Margutta, the artist quickly established himself in the seventies and eighties of the nineteenth century between Rome, London, Paris and Madrid as the only true student of Mariano Fortuny y Marsal, supported by the merchant Adolphe Goupil and highly sought after by European and American collectors for his precious costume scenes and colorful images of local folklore, made with skill in oil or watercolor.

At the height of his success, which had frequently seen him tread the scene of the Parisian salons, Simonetti drastically decided to abandon his artistic career to devote himself to the more profitable trade in works of art, qualifying himself in a short time as an internationally renowned connoisseur.

His collection, in which the interest in European art was alongside that for Arab-Hispanic manufactures, marked a new line in the antiques market, while his studio in Palazzo Altemps, set up as a museum, was a model for many artists.

Involved in the cultural movement for the rebirth of applied arts and artistic education, which in Rome had its result in the creation of the Industrial Art Museum, Simonetti was also one of the most committed artists in the organization of the famous Roman carnival, artists’ festivals in Tor Cervara promoted by the International Artistic Association and public Capitoline celebrations.

In the first half of the nineteenth century the principles of the classicist landscape were developed in Rome, directly inspired by the seventeenth-century prototypes of Claude Lorrain.

This real landscape-architecture, always ordered by one or more arboreal wings, with small figures in the foreground and a slow slope towards the horizon, will be experienced by Italian and foreign masters.

In this sense, an exemplary exhibition is the large canvas by the Swiss Johann Jakob Frey: View of Rome from Monte Mario. The modus operandi to fix in these large canvases the sensations derived from life was constituted by the studies in the open air made in oil, on small canvases or more often on paper, according to a method developed in France by Camille Corot and then imported into Italy by the Dutch Anton Sminck van Pitloo.

On display, a cameo from life studies, is the small oil on paper by Ippolito Caffi depicting the interior of the Colosseum with flares. Soon it will be Massimo Taparelli D’Azeglio to theorize this working method: “I painted from life on canvases of sufficient size, trying to finish the study, or painting on the spot, without adding a brushstroke at home” (D’Azeglio 1867 ).

Also during the first half of the century the subject of the Pontine marshes appears for the first time in the repertoire of landscape painting, of which a fascinating work by the Welsh Penry Williams will be on display. A distinctly documentary intent, on the other hand, is what emerges from the painting by Vincenzo Giovannini depicting Pius IX leaving Rome on the Via Flaminia.

The next step will be painting from life experimented by Nino Costa, who with his friend George Mason will begin to beat the Roman countryside by painting – and in the words of the Roman painter – “where it is necessary to stay with your feet in the puddles”. The atmospheric effects of the “intellectual realism” operated by Costa and Mason, soon associated in the so-called “Etruscan School”, will then be fundamental for the subsequent development of Tuscan realism.

The common people in the pine forest of Ostia Antica can be considered a programmatic manifesto of the Etruscan School. At the same time as Nino Costa, numerous foreign painters began to portray the most fascinating places in Rome, solicited by an increasingly flourishing market, abandoning the realist language in favor of a more immediate para-impressionist technique.

Among the various works on display we recall Theodor Groll’s The Arch of Titus, The Tiber in Ponte Sant’Angelo with St. Peter in the background by the German Carl Wuttke, and On the Via Appia by Franz Richard Unterberger. 890 the artist left the studio of Palazzo Altemps and bought the building recently built by Prince Baldassarre Odescalchi in via Vittoria Colonna. The Simonetti Gallery became one of the most prestigious spaces in the city, was visited by illustrious exponents of the Italian and European aristocracy and the artistic world and was a fundamental point of reference for leading experts on the international museum scene.

For the first time since his death, the Berardi Gallery is dedicating an exhibition to the artist-antiquarian in which some of his most significant works from the heirs’ collection will be exhibited, to exemplify some of the key themes of his rich production. The exhibition is accompanied by the first monograph on the artist, edited by Teresa Sacchi Lodispoto and Sabrina Spinazzè, accompanied by a rich bibliographic and iconographic apparatus including the publication of the works dispersed on the international market.