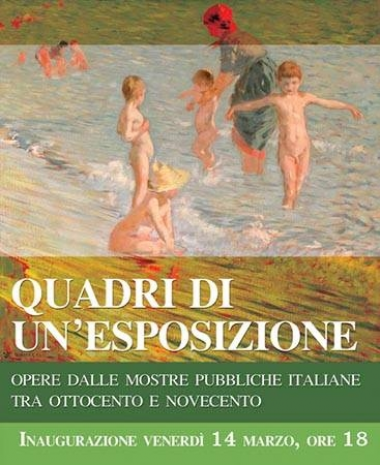 PICTURES OF AN EXHIBITION. Works from Italian public exhibitions between the 19th and 20th centuries.

The title of the exhibition is borrowed from the composition of the same name dated 1874 by the Russian musician Modest Petrovic Musorgskij, since the subtle fil rouge that unites most of the works presented in the exhibition – sometimes very distant in the variety of genres as it happened in that case – is their being conceived for a public exhibition.

The idea underlying the meeting of these works is, therefore, that of recreating hic et nunc a period exhibition, obviously without following the temporal philological rigor, but simply that of the representativeness of the works. This operation relates to the social history of art: for the first time in the nineteenth century the artists were lacking an important commission, whether the nobility or the church.

Consequently, the works began to be conceived as a function of a rhythmic exhibition occasion – the Promoters or national exhibitions – to present the best of their production to a vast public which is that of united Italy. In this way, in a short time, production was no longer marked by the “luxury” of the aristocracy but by the “taste” of the new rising middle class. Once the destination has been changed, the subjects, the style and even the frames change.