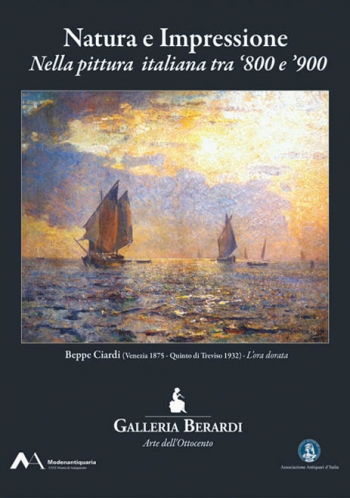 Galleria Berardi, on the occasion of the Modena Antiquaria 2015 Exhibition, presents a collection of works inspired by the evolution of the confrontation with truth in Italian painting between the nineteenth and twentieth centuries, where the passage from the naturalist language matured in Italy in the sixties to painting is felt impressionist, derived from French examples, and brought to extreme maturity at the beginning of the twentieth century with the Divisionist experiments.

Exemplary in this sense of a mature realist language are works such as La solitudine by Antonio Fontanesi dated 1874, a cameo of the revolutionary technique of the Reggio painter, or October by Luigi Gioli, a tribute to the “true without frills” preached by the theorist and sculptor Adriano Cecioni.

The stylistic change towards a language of “Impression” is then fully felt in very different paintings such as The Golden Hour by Beppe Ciardi, or in the sunny countryside of Adolfo Tommasi, also linked in iconography to the well-known Impressionist masterpieces, which however preserves a solidity of the all macchiaiolo perspective system.

With Calma lunare by Don Angelo Rescalli there is a personal reading of the pointillist technique filtered by admiration for Mario De Maria; while with Umberto Moggioli’s Fontana a San Bonaventura the Impressionist language approaches an expressionist koinè in such a way as to recall the path of Vincent Van Gogh.