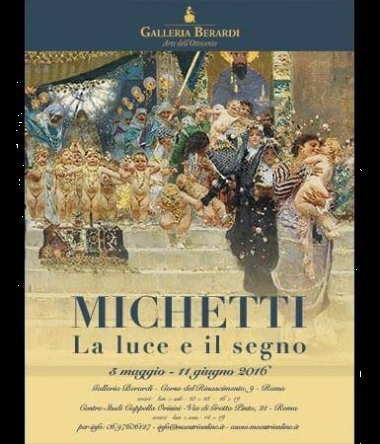 The chance, fortuitous and entirely exceptional, of presenting on the same occasion The Corpus Domini procession in Chieti of 1877 by Francesco Paolo Michetti, perhaps his most beautiful and significant painting for the impact it will have on his contemporaries, and an extraordinary set of works largely coming from the master’s hereditary fund, allowed to focus on the two extremes of the artistic process of one of the protagonists of our nineteenth century.

On the one hand, Corpus Domini, formerly the property of the German Emperor Wilhelm II, a single painting that contains a hundred and which reveals in an exemplary way the “painter of light”, the artist who had been able to read Fortuny’s lesson and his Japanese suggestions using them to update Italian naturalism at the European level.

The painter, as well as critic Francesco Netti, will hail this operation as the birth of the “white empire”, a new way of painting characterized by a clear and luminous palette that will soon condition all the regional schools for at least a decade.

On the other, almost eighty works after Corpus Domini, where Michetti – a Michetti who had by now won, had achieved success and international fame – begins to paint for himself, passing from “seeing” to “seeing”, quoting his friend Gabriele d’Annunzio. With these successive works, an operation of simplification of the real is carried out, the details and any descriptivism considered superfluous are lost, in order to grasp the essence, the changing soul of reality.

The instrument becomes the sign, which progressively abandons also the richness of the colors for a more severe black and white, now stretched out with flowing strokes, now in short segments, the only means of capturing phenomenal data in their ontological depth.

From light to sign, therefore, in a path that will lead to the limits of abstraction following that process of simplification that was typical of the ultimate achievements of many great masters, from Rembrandt to Guido Reni up to the contemporary Pierre Auguste Renoir.