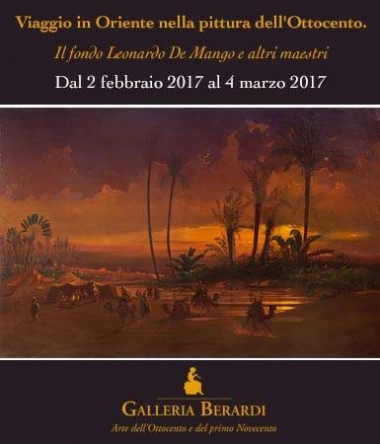 Journey to the East in 19th century painting. The Leonardo De Mango fund and other masters

The fascination of the Western world for the East underwent a profound acceleration in Italy with the nineteenth century: first the spread of the pro-Hellenic theme, think of I refugi di Parga by Francesco Hayez (1826), then the pioneering activity of great traveling artists such as Carlo Bossoli, who was in Morocco in 1851, or Ippolito Caffi, who went to Persia in 1855, and finally the spread of orientalist fashion following the opening of the Suez Canal (1869).

At this point the exotic theme becomes very topical and demanded by the market also thanks to the resounding international success of an artist specialized in this trend such as Mariano Fortuny who, despite being Spanish, had chosen Rome as his favorite city. The subsequent “travel diaries” by Edmondo De Amicis Morocco (1876) and Constantinople (1877), published by Treves with accurate illustrations by Cesare Biseo and Stefano Ussi, will contribute to popularizing this sort of new Grand Tour towards the East.

A mysterious and unknown East which in recent years has become a source of inspiration for musicians, architects, painters and writers who often and willingly draw on their imagination to recreate the descriptions of a distant world: desert landscapes crossed by caravans, magnificent Moorish palaces, harems where sinuous odalisques dance for their sultans or naked slaves for imminent sale.

A real journey to the East transposed into painting is re-proposed on the occasion of this exhibition starting from two works with a monumental format that reflect the lights and costumes of the East well: the Caravan in the desert by Ippolito Caffi and the Odalisca by Pietro Morgari . Among the other works presented we remember Giuseppe Bezzuoli’s Arab Head, Hermann Corrodi’s The Tunisian Market, Giulio Rosati’s The Carpet Seller, Emilio Magistretti’s Flowers of the Harem which mimics a famous work by Hayez.

Apart from the presence in the exhibition of the hereditary fund of Leonardo De Mango, one of the protagonists, together with Fausto Zonaro, between the 19th and 20th centuries in Istanbul. The twenty or so works depicting views of her native Bisceglie and scenes set in the East come from the artist’s studio and upon her death passed into custody at the Consulate General of Italy in Istanbul.

Later the Consul General Mario Canino put them up for sale and they were bought by a consular Regent and from him they passed to the heirs. The paintings of Leonardo De Mango, a master who worked more than fifty years in his studio in Constantinople, exemplary represent all the magnetism that the East could exercise on Italian painters.