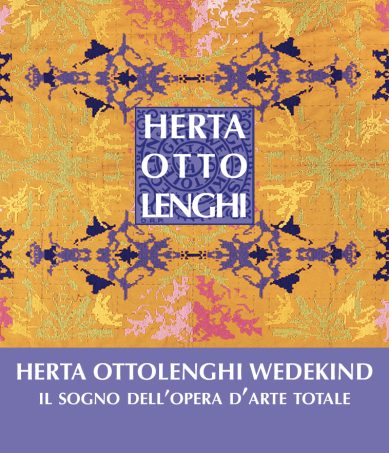 Herta Ottolenghi Wedekind. The dream of the total artwork

Daughter of the entrepreneur and banker Paul Wedekind and wife of the Genoese count Arturo Ottolenghi, Herta Ottolenghi Wedekind (Berlin 1885 – Acqui 1953) was an enlightened patron and one of the main protagonists of the extraordinary season of decorative arts in the 1920s and 1930s.

Pupil of the German artist Hans Stoltenberg – Lerche, with whom she studied in Rome between 1910 and 1912, she debuted in the field of sculpture. Around 1920 she perfected an innovative system, patented in 1922, for the creation of drawings for works of applied art based on the symmetrical duplication of abstract motifs obtained through random traces of ink, in a way that has points of contact with the contemporary “Rorschach spots” used in psychodiagnostics. These forms are used in the decoration of tapestries, carpets, cushions, screens, fabrics for furniture, both woven and hand-embroidered, with which the artist would triumph in major exhibitions of decorative arts of those years.

The debut of 1922 at the Deutsche Gewerbeschau München, was, in fact, followed by the International exhibitions of decorative arts in Monza in 1923, 1925 and 1927, the first National exhibition of artistic industries at the Kursaal of Viareggio in 1924, the Exposition internationale des arts décoratifs et industriels modernes in Paris in 1925, the Triennale of Monza in 1930 and the First exhibition of women’s art and work at the Castello Sforzesco in Milan also in 1930. These experiences were added to many other personal exhibitions, such as the one of 1926, at the Kunstgewerbehaus Friedmann & Weber in Berlin.

The remarkable success with the public and critics is confirmed by the enthusiastic reviews (she was described as a “brilliant artist” by the critic Piero Scarpa) and the prestigious awards she received, as well as the numerous purchases, among which we must mention the tapestries bought by the city of Milan after the Exhibition of 1923 in Monza. Over the years, several of his works entered the most important collections in the world, including the Victoria & Albert Museum in London and the Metropolitan Museum in New York.

To underline also the role played in the fashion circuit: in Monza, in 1925, she obtained the gold medal for the XXI class, dedicated to fashion and clothing accessories.

The narration of the patronage of Herta and her husband Arturo, which took shape around the construction of the Villa of Monterosso, near Acqui Terme deserves a separate chapter. This ambitious project, which lasted for almost half a century, saw the participation of some of the main protagonists of Italian architecture, like Federico D’Amato, Marcello Piacentini, Ernesto Lapadula and Giuseppe Vaccaro, who completed the project. The villa in Acqui, which also housed the artists’ studios, can be defined as a true “acropolis of contemporaneity” which, thanks to the patronage of the couple, hosted works of art chosen and commissioned exclusively for their location in the large house. What is also particularly important, inside the park of the villa, is the mausoleum designed by Piacentini and entirely decorated with frescoes and mosaics by Ferruccio Ferrazzi. With Arturo Martini and Ferrazzi, an artist with whom she collaborated for more than twenty years, Herta would establish continuous relationships of commission and conspicuous cultural exchanges, evidenced by their correspondence, some of which has never been published.

Moreover, thanks to Piacentini’s willingness, in 1934 the Ottolenghi couple had the ancient Jona Ottolenghi shelter in Acqui restored, to which they donated some of the greatest masterpieces in the history of twentieth-century Italian art: not only The Prodigal Son by Arturo Martini, but also Ferruccio Ferrazzi’s Prismatic Vision. In the shelter most of Herta’s sculptures made in the Thirties would find place, such as the Madonna and Child.

In the last twenty years of her life, Herta devoted herself above all to her beloved sculpture, to poetry and to the completion of the enterprise of Monterosso, where she died in 1953.

The exhibition focuses on the textile creations of Herta Ottolenghi Wedekind, of which 40 examples are presented. Accompanying the exhibition is a monographic volume that, for the first time, traces the salient moments of her career reconstructed through unpublished documents and writings.