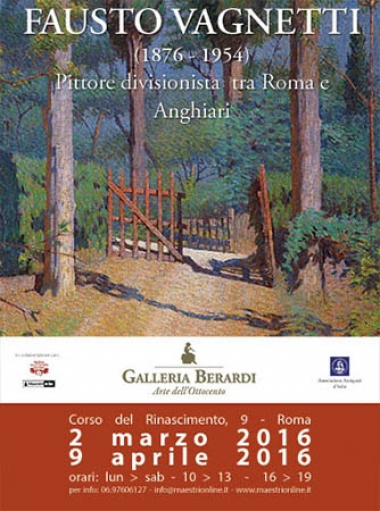 The presentation to the public of a corpus of works by the Tuscan artist Fausto Vagnetti (Anghiari 1876 – Rome 1954) well distributed over the chronological span of his long career, offers the opportunity to finally rediscover the great talent of a master of Roman Divisionism left behind. for too long in oblivion.

Already at a first glance what are the distinctive elements of Vagnetti’s stylistic code emerge: the correctness of the drawing, the divisionist technique applied with scientific rigor and the delicate poetry that emerges in particular from the landscapes, characterized by the absence of the human figure (exemplary for these aspects Sole d’agosto or The cypresses of the vineyard).

In addition to the landscapes inspired by the love for Anghiari and Rome, the exhibition will include some portraits, often dedicated to the private universe of family affections (Portrait of Rosalia), in which the artist’s skill in psychological introspection is evident.

There are basically two fixed points of Vagnetti’s activity: the never forgotten Anghiari, a place of escape heralding inspiration over the span of a lifetime, and the deeply felt mission for teaching, partly due to his socialist faith and to the consequent belief in collective progress, which he wanted to take charge of through his role at the Institute of Fine Arts in Rome.

The same choice of employing the pointillist technique, always supported by a drawing correctness of distant purist matrix, had been espoused by Vagnetti as close to his idea of ​​progress in art (La vigna del dottore of 1919, Palermo Galleria d’Arte Moderna) .

His participation in the exhibitions of the “Roman Secession”, born in 1912 from the will of a group of artists to break away from the official exhibition circuits, which are now considered to be very late, is linked to this cultural climate.

The modernity of the Roman secessionists, fully shared by Vagnetti, found fulfillment precisely in the pointillist technique, which came back into fashion in the early 1910s and used above all for scenes with an intimate flavor.

The works presented in the exhibition also include Le case di Valle al sole (1914), The fountain of Palazzo Borghese (1915), Nella pineta di Tordiquinto (1918) and the Balocchi di Nenella (1934), the latter participating in the climate of the so-called “Magic Realism”.