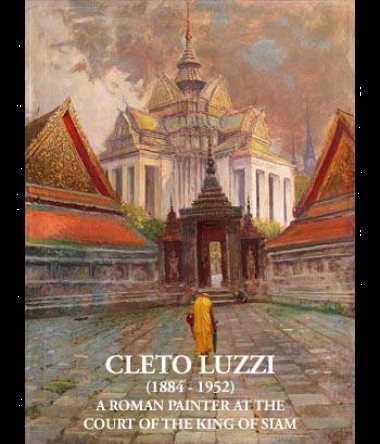 Cleto Luzzi belongs to that still large category of artists who lived between the nineteenth and twentieth centuries who fell into oblivion and forgotten by critics. This assumption appears in some ways paradoxical if we consider that, during his career, Luzzi not only managed to earn important commissions and awards but, from 1929 to 1932, he had the privilege of becoming the official painter of the King of Siam.

Trained in direct contact with the late nineteenth-century academic culture, Luzzi studied at the Institute of Fine Arts in Rome under the guidance of two exceptional masters: Francesco Jacovacci and Giulio Aristide Sartorio.

From the first he received a certain indulgence towards sketching, clearly visible, for example, in the youthful “genre” paintings and watercolors set in the more affectionate and Rococo eighteenth century. From Sartorio, however, he learned the techniques necessary for the correct execution of monumental decorative art, a sector that Luzzi frequented often and with considerable success.

He soon specialized in the decoration of cult buildings in the capital, in 1914 he frescoed the church of San Nicola de ‘Prefetti adopting a correct, but not very original, classicism. With the same approach he then created numerous altarpieces (for example in San Claudio, in San Giuseppe a Capo le Case, in the church of Santa Maria Margherita Alacoque, near Sant’Eusebio and, again, in the chapel of the Precious Blood in Verano where in 1940 he painted the Via Crucis).

An evident change of register appears instead in the canvases made in the East (Siam, Cambodia, India, Indochina, Burma). Once moved to Bangkok with the position of director of the Royal Academy of Fine Arts and court painter (1929), Luzzi seemed to open up to experimentation.

The traditionalist and oleographic tone of the works made at home gave way to a freer language, built on refined colors and agile brushstrokes rendered in the Divisionist manner. With a sometimes very personal approach, sometimes stereotyped on the canons of Orientalism, Luzzi painted temples, local monuments, fascinating naturalistic visions and even exotic “snapshots” of everyday life.

If in India he did not give up portraying a casual snake charmer, in Cambodia he was attracted by the ruins of Angkor Wat and, with lyricism and coloristic sensitivity, he created a suggestive view of the temple complex at sunset. The eastern light certainly played a crucial role in Luzzi’s opening to a more intimate and refined naturalism; however, the formal data of the aforementioned Angkor Wat painting (1930), suggest how much the artist must have already meditated on landscape painting in Rome, for example by Enrico Coleman and his teacher Sartorio.

Although gifted with considerable talent, Cleto Luzzi was soon, unjustly, forgotten. After his death, a series of retrospective exhibitions (organized in 1956 at the Palazzo delle Esposizioni in Rome and the Collegio Nazareno, in 1958 at the Circolo di Forestieri in Sorrento) were not enough to keep the painter’s name in vogue.