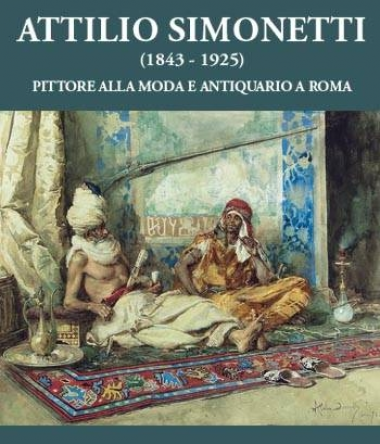 Among the main collectors and antique dealers of his time, Attilio Simonetti (Rome 1843-1925) was a highly appreciated painter on the international scene. Trained in the capital between the Accademia di San Luca and the informal Accademia di Giggi in via Margutta, the artist quickly established himself in the seventies and eighties of the nineteenth century between Rome, London, Paris and Madrid as the only true student of Mariano Fortuny y Marsal, supported by the merchant Adolphe Goupil and highly sought after by European and American collectors for his precious costume scenes and colorful images of local folklore, made with skill in oil or watercolor.

At the height of his success, which had frequently seen him tread the scene of the Parisian salons, Simonetti drastically decided to abandon his artistic career to devote himself to the more profitable trade in works of art, qualifying himself in a short time as an internationally renowned connoisseur.

His collection, in which the interest in European art was alongside that for Arab-Hispanic manufactures, marked a new line in the antiques market, while his studio in Palazzo Altemps, set up as a museum, was a model for many artists.

Involved in the cultural movement for the rebirth of applied arts and artistic education, which in Rome had its result in the creation of the Industrial Art Museum, Simonetti was also one of the most committed artists in the organization of the famous Roman carnival, artists’ festivals in Tor Cervara promoted by the International Artistic Association and public Capitoline celebrations.

In 1890 the artist left the studio of Palazzo Altemps and bought the building recently built by Prince Baldassarre Odescalchi in via Vittoria Colonna. The Simonetti Gallery became one of the most prestigious spaces in the city, was visited by illustrious exponents of the Italian and European aristocracy and the artistic world and was a fundamental point of reference for leading experts on the international museum scene.

For the first time since his death, the Berardi Gallery is dedicating an exhibition to the artist-antiquarian in which some of his most significant works from the collection of the heirs will be exhibited, to exemplify some of the key themes of his rich production. The exhibition is accompanied by the first monograph on the artist, edited by Teresa Sacchi Lodispoto and Sabrina Spinazzè, accompanied by a rich bibliographic and iconographic apparatus including the publication of the works dispersed on the international market.