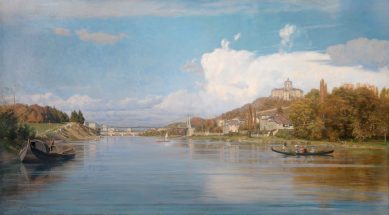 The Po in Turin

On the back, scroll of the 1880 National Exhibition in Turin

A prolific painter and highly representative of the city of Turin, Marco Calderini was also an important critic and publicist of his time. Of this not marginal aspect of his activity, we would like to recall the monographs dedicated to Vincenzo Vela and Antonio Fontanesi, as well as those on the painters Andrea Gastaldi, Giovan Battista Quadrone, Alberto Pasini and the sculptor Carlo Marocchetti; and the articles on, among others, Demetrio Cosola, Alberto Maso Gilli and Carlo Pittara.

A pupil of Antonio Fontanesi’s at the Accademia Albertina’s School of Landscape in Turin – although he always remained far removed from the romanticism of the master – Calderini based his painting on an objective realism substantiated by a suffused emotional lyricism, continuing in this way the lesson of Rivara, who in the 1970s represented the front line of the Piedmontese realist avant-garde, and consciously distancing himself from the post-impressionist painting of Lorenzo Delleani and his followers.

His painting was rewarded not only in Italy but also in the most prestigious international exhibitions: he appeared at the Vienna International Exhibition in 1873, at various Salons in Paris, in Nice, in Barcelona in 1888 (where he won the silver medal) in London, and finally in Cologne in 1888 and 1889, where he was awarded the silver medal.

The Po in Turin is one of his greatest achievements in terms of commitment and size. The optical clarity is achieved through a skilful organisation of composition, perspective and light. The spatial depth, clearly and incisively suggested by the vanishing lines of the river, on either side of which the modern buildings of the Piedmontese city stand out, contributes to the absolute rigour of the layout, which brings to mind metaphysical atmospheres.