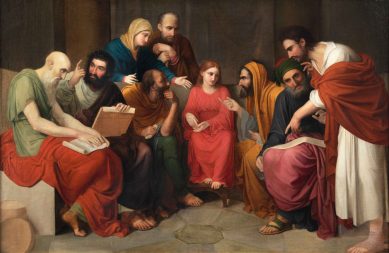 Jesus disputes with the doctors in the temple

Model for the larger version of the same subject, kept at Palazzo Farnese in Piacenza

It was in the treatment of mythological themes, history and biblical episodes that Landi made his undisputed name, skilfully combining ideal beauty and expressive rendering, “competing” with his contemporaries Camuccini, Appiani and Bossi and working hard in the Roman environment, without ever abandoning his faithful Piacenza patrons.

In 1808 he painted the Ascent to Calvary for the church of San Giovanni in Canale, while in 1812, the year in which he was appointed professor of painting at the Accademia di San Luca, he was asked to paint the subject Jesus Disputes with the Doctors in the Temple, commissioned by Marquis Mandelli for the Piacenza church of Santa Maria della Pace. The unpublished canvas presented here is the model for the same subject, larger in size, kept in Palazzo Farnese in Piacenza, with which it has many similarities, but which also shows some substantial variations, especially in the rendering of the colour finishes and in the inclusion of scenic, costume and physiognomic details: the basket in the lower left-hand corner is open, but does not reveal the rolled parchments as in the final draft; many of the sandals on the feet of the doctors show small differences compared to the Piacenza canvas, a detail that is particularly evident in the figure in profile in the foreground on the right and in the personage at his side; the parchments held by the doctors, then, are still unwritten; The face of the doctor to the right of Jesus shows a considerable difference from his counterpart, since he appears to be an old man with dark, thick hair and beard, while in the painting from Piacenza, although adopting the same expression as Jesus’ words, he appears with a shorter, lighter hair, a more aquiline nose and a decidedly younger age.

The value of the painting lies in these discrepancies with the final drafting and also in the extraordinary fusion of various elements: from the semi-circle made up of human figures that is so reminiscent of Raphael’s examples, to the brilliant naturalistic rendering of the heads and the numerous character registers that emerge, clearly reminiscent of Leonardo da Vinci, to the plastic clarity of the figures that is tempered by the graceful colouring, the hint of soft chiaroscuro and the delicate and skilful drawing line that defines the elegant drapery. The perfect handling of the composition derives from a reflection on Mengsi’s method, which consisted in using wax or clay models made for him by sculptors such as Adamo Tadolini and Pietro Tenerani.
In the canvas, the young Jesus, in the red robe that makes him stand out, is seated among six Doctors of the Law, as narrated in the episode from the Gospel of Luke.

Behind him are Joseph and Mary, who have found their son after three days of searching. Four of the doctors are holding parchments of sacred scriptures in their hands or on their legs, others are discussing with the very young Jesus, interested, astonished, frowning or concentrated. The rendering of the affections of each individual face and the gestural poses of the characters thus emerges as the primary quality of the painting, in correspondence with the verses of Luke and thus in the precise application of the Horatian principle ut pictura poësis that is also found in canvases with mythological subjects and in the exempla virtutis borrowed from Greek and Latin literature. This vision is perfectly combined with the search for an ideal and timeless beauty, certainly inspired by antiquity, and with the serene balance of the composition, in the choice of a bare and simple architectural backdrop that has the role of exalting the mastery in the chromatic drafting of the clothes, the re-elaboration of passages and figurative models of the primitive painters, the management of the naturalistic anatomies and the suggestive compositional coherence that anticipates the purist results.