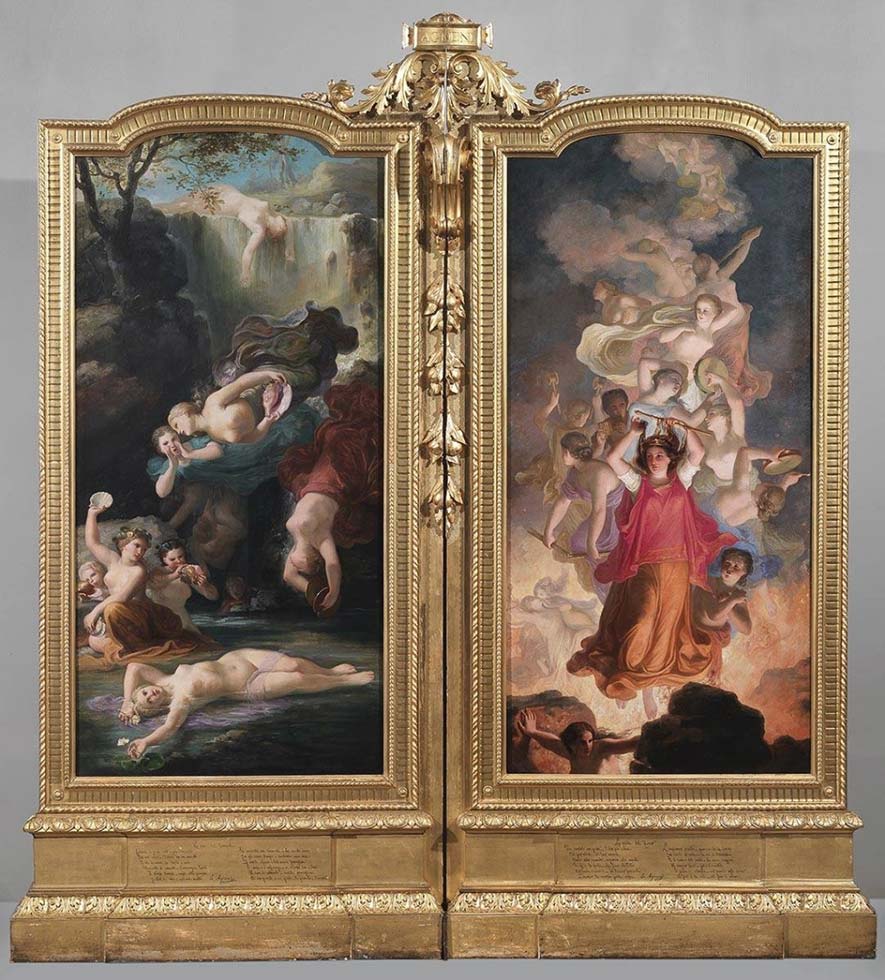 Signed at the bottom on the base of the frames
provenance: Marquis Corsi Salviati; Rome, private collection

The two canvases mounted on a wooden support in question are clearly to be ascribed to Eugenio Agneni (Sutri, 1816 – Rome,
1879), a paradigmatic figure of an Italian painter of the Risorgimento years who had a successful and continuous artistic activity
of international scope, it has combined intense political and military activity, undertaken this starting from effervescence
Roman following the election of Pius IX until the expedition of Mentana and then in the early years of Rome as the capital, a period in
to which he holds various administrative positions.

The attributive clarity of the works derives not only from the large inscription
center inserted in the elaborate neo-Gothic style stage that encloses the two works in a diptych, but also
from the direct relationship that binds these to the cycle of frescoes executed between 1865 and 1868 for the Marquis Antonio Maria
Salviati courses in the reception room of the family villa in Sesto Fiorentino. Agneni resides almost permanently
in the Florentine area between 1863 and 1871 after a phase of European-wide wanderings that began at the end
of the Roman republican experience of 1849, in which he was involved to the point of having to hide for various reasons
time starting from July of that year with the Marquis Salviati, who therefore already knew before the next
transfer to Florence. The need to stay away from Italy, as well as connections with Mazzinian exiles and
evidently also a well-known ability in knowing how to reinvent oneself in different cultural spheres have allowed to
Agneni to profitably attend the artistic scenes of London and Paris, cities in which she lived and worked obtaining commissions
of absolute importance (he has decorated some rooms of Buckingham Palace, the Covent Garden Opera and the Louvre), e
presenting his work at the Royal Academy in London. So if we have to keep faith with the findings of our friend
Luigi Calamatta (“you’re full of money”) and the frequency with which Giuseppe Mazzini asked Agneni to contribute
financially to the activities of Giovane Italia or to other similar initiatives, the news acquires greater substance
recorded by Martina Salza for which the execution of the works of Sesto Fiorentino was financed by the artist himself
as a tribute of friendship to the Marquis Corsi Salviati. Of the complex overall iconography, which includes references
to the “Hours”, to “Iris”, to the “Day, to the” Night “and to the zodiac signs, the oil diptych recalls the four frescoes
on the longitudinal walls dedicated to the elements and in particular “Fire” and “Water”, thus leaving space for
suppose that there may be a second diptych dedicated to “Air” and “Earth”. The unfortunate dispersion of numerous e
potentially decisive sections of the Guicciardini Corsi Salviati Archive in storage at the State Archives of
Unfortunately, Florence does not allow to reconstruct binding information on the cycle of frescoes, on the diptych and on the value to be attributed
to the two ecphrastic compositions shown on the canvas and signed by Agneni himself. The fact that in both it recalls
the complex challenge of the painter in having to depict the contrasting impulses of natural impulses seems to everyone
consonant with the particularity of the Corsi Salviati commission which, as mentioned, has been largely financed
by the painter himself and, presumably, with a strong imprint also as regards the thematic-structural level.
For example, there is the possibility that the diptych represents a sort of private synthesis of the frescoes, a suggestion suggested
by the evident process of erotic amendment made to the iconography in the monumental version. Notice in
this is the sense of the presence of the two naked water lilies lying on top of the waterfall and below in the stream (this replaced by a
rondine) in the canvas “The Voices of the Stream”, as well as the transposition of the genre of the figure that tears the earth in “The
Screams of Fire ”, and finally the frequent covering of the breasts operated with various expedients in both scenes of the frescoes.
The lively expressive ductility shown here by Agneni, re-emerged in these
works thanks to a skilful restoration that returns to the studies an essay of rare value regarding this specification
stylistic phase of an artist who, although little known and studied, has in fact gone through with recognized charisma
a substantial portion of the cultural and political arteries of his time. The intense phase converges on the two canvases
academic training as well as the shrewd intuition of the connoisseur of the rule who came into contact with innovations
even strong linguistic ones but that can give back in a translation suitable for a less updated public. In this superimposition between the Minardian candor of the anatomies and a general expressive voluptuousness that can remember a lot
the more mature phases of French academic romanticism as well as a certain pre-Raphaelite chromatic verve, Agneni testifies
effectively a linguistic ductility that we recognize in the same lyrics that accompany the diptych: “Looking for
the shapes of the water element \ Between vivid colors the artist has a concert \ Until the hand that shakes and creates \ Answers
at the concert the image found “[from” Le Voci del Torrente “].